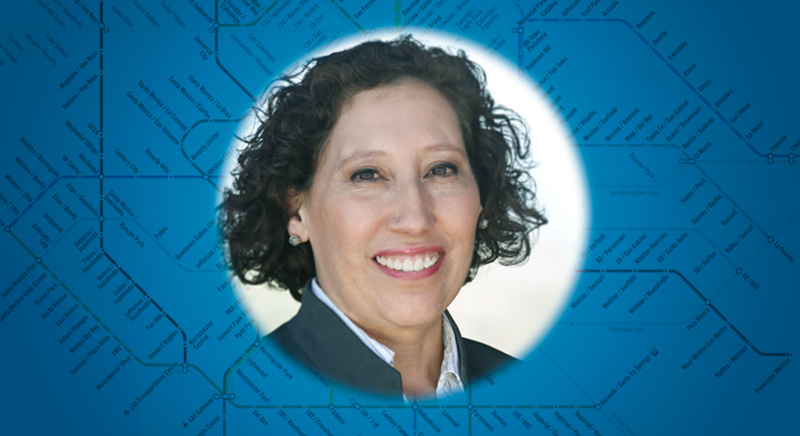 UCLA Samueli Newsroom
When Leticia Solis ’90 was 14 years old, her older sister took her to a Society of Hispanic Professional Engineers (SHPE) conference at UCLA. It was there that Solis first learned what an engineer does and, inspired by those she met, decided she wanted to pursue a career in the field.

Little did she know that just a few years later, she would find herself back at UCLA, pursuing a degree in electrical engineering and eventually becoming Deputy Executive Officer – Wayside Systems Engineering and Maintenance at the Los Angeles County Metropolitan Transportation Authority, or LA Metro. In her role, Solis oversees more than 350 employees, a $40 million budget and the installation and maintenance of critical systems that support the rail lines serving LA.

Solis’ mother and father came to the United States in the 1940s from Nicaragua and Mexico, respectively, and always instilled in their seven children the value of working hard and pursuing excellence.

“My parents taught us the importance of family, education and giving back to the community,” Solis said.

Technically the youngest in the family with an identical twin sibling, Solis had a penchant for math and science growing up, but the high school she attended didn’t offer Advanced Placement courses so Solis took advantage of all the honors STEM classes she could. One of her older sisters, was the first in the family to graduate from college and provided a roadmap for Solis to follow when it came time for her to apply to schools.

“I was fortunate to have an older sister that had graduated from another university, so I could use her experience as a foundation for how to apply,” Solis said. “I also had another older sister who was going to UCLA at the time, and she would take me to visit the campus often.”

However, neither of Solis’ sisters were engineering students, so she had to find her own way in deciding how to apply for an electrical engineering program. She had her mind set on attending one of the top engineering schools in the country, and UCLA fit that bill.

Despite the large student population, Solis was able to find her community on campus.

The Center for Excellence in Engineering and Diversity (CEED) soon became a second home as Solis underwent its two-week orientation before she started her freshman year. Through CEED, Solis was able to learn about potential career paths and networking tips. She also participated in study groups that helped her thrive in even some of the most difficult classes.

Solis was also inspired by Professor Izhak Rubin, who she considered a mentor — someone who was always patient and accessible to the students. Her own positive experience made Solis want to pay it forward for other students. She spent a great deal of time working with the Society of Latino Engineers and Scientists (SOLES), tutoring elementary school students and attending national conferences.

Following graduation, Solis took a job as an electrical engineer at PacifiCorp Naughton Plant in Kemmerer, Wyoming, where she was the only woman, and the first woman of color, working as an engineer. It was a difficult transition for Solis, coming from a metropolitan city to a remote, rural coal mining town of 3,500 people.

Eventually her persistence paid off, gaining respect from coworkers who were less than enthusiastic and friendly when she first started the job. She spent three years at the plant before transferring to PacifiCorp’s Oregon facility, where she took over as the transmission/distribution field engineer and was once again one of a few female engineers and the only woman of color in her department.

“It is so important to have women go back into their community to share their stories and show that it is possible,” Solis said.

Her time at Naughton reaffirmed her passion for telecommunications, especially after she completed a project swapping out analog switches to a public branch exchange system in Wyoming. After attending a SHPE conference, she was offered a job at GTE — now Verizon — where she held several key management and technical position over two decades. She even stepped out of her comfort zone, heading Verizon’s consumer sales and service centers in California.

Not wanting to relocate when Verizon sold its California property to Frontier, Solis decided to take up an opportunity at LA Metro in 2017, leading its communications systems group. She has since worked on several large-scale projects, including building out LA County’s rail system. As a regular patron of LA’s public transportation, working on something she uses herself makes Solis’ work that much more rewarding.

Although LA Metro’s employee base largely mirrors the diverse community it serves, Solis said she still feels there is a lack of female representation in technical positions and wants to help close that gap.

“At Metro, I am often the only woman and/or woman of color in the room,” Solis said. “This inspires me to encourage my staff to recruit from women organizations like the Society of Women Engineers and increase the opportunities to recruit more diverse talent for the organization.”

As she reflected on what has helped her achieve success in her career, Solis said it was having access to a top-notch education and supportive mentors that gave her the confidence to pursue her goals. And she now works to give back as much as she can to pave the way for future Latinx engineers.

“It is so important to have women go back into their community to share their stories and show that it is possible,” Solis said. “I look for opportunities to help to mentor young women in the community and share my engineering experiences with them. Young people need positive role models and to hear stories that reflect their own lives and challenges.”