Back to Dean’s Executive Board 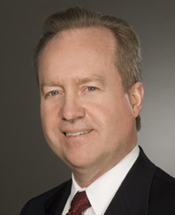 Dr. Thomas A. Kennedy is Chairman and Chief Executive Officer (CEO) for Raytheon Company (NYSE: RTN). Raytheon Company, with 2015 sales of $23 billion and 61,000 employees worldwide, is a technology and innovation leader specializing in defense, civil government and cybersecurity solutions. Raytheon is headquartered in Waltham, Massachusetts.

Kennedy joined Raytheon in 1983, starting off in engineering on radar development, and during his more than 30 years with the company, he has developed a deep understanding of the company’s operations, technologies and customers through leadership positions in many different locations and functions.

Before adding the responsibilities of chairman to his position in October 2014, Kennedy became CEO in March 2014, and he was elected to Raytheon’s Board of Directors in January 2014.

Previously, Kennedy served as a Raytheon Company vice president and president of the Integrated Defense Systems (IDS) business, overseeing a broad portfolio of weapons, sensors and integration systems spanning multiple mission areas and provided to a range of domestic and international customers.

Before leading IDS, Kennedy served as vice president of Tactical Airborne Systems (TAS) for the Raytheon Space and Airborne Systems (SAS) business. At TAS, he was responsible for overall strategic direction and operation of the organization. He also served as Mission Systems Integration vice president with responsibility for the U.K. Ministry of Defence Airborne Stand-Off Radar program.

Earlier in his Raytheon career, Kennedy was a new business leader and program manager for several radar and electronic warfare systems development programs. He holds several patents related to those technologies. In 2003, Kennedy received the Aviation Week Laureate Award for his achievements on the Active Electronically Scanned Array program.

During his military service, Kennedy attained the rank of captain in the U.S. Air Force, with responsibility for managing satellite launch vehicle avionics development and production programs.
Kennedy holds a doctorate in engineering from the University of California, Los Angeles; and bachelor’s and master’s degrees in electrical engineering from Rutgers University and the Air Force Institute of Technology, respectively.