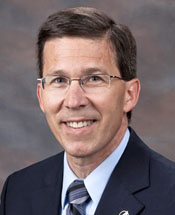 Dr. Wayne H. Goodman is executive vice president of The Aerospace Corporation. He assumed this position on December 31, 2016.

Goodman was formerly senior vice president of the Operations and Support Group, with oversight responsibility for Corporate Communications, Diversity and Inclusion, Facilities, Finance and Business Operations, Human Resources, Security and Safety, and The Aerospace University.

Prior to that, Goodman was the vice president of Space Program Operations, where he worked with the Air Force, government, and industry partners to develop military satellites and to advance national security space systems. He oversaw four major mission areas—communications, surveillance, weather, and navigation—and assisted with the development of system requirements, provided schedule/cost risk assessments, and solved systems development problems.

Goodman is a Fellow of the American Institute of Aeronautics and Astronautics. He is a member of two university boards: Engineering Dean’s Advisory Council at the University of California, Los Angeles and Board of External Advisors, Mechanical Engineering Dept. at UC Berkeley. He is also a member of the Science and Engineering Advisory Council of Achievement Rewards for College Scientists Foundation. He served on the Air Force Scientific Advisory Board from 2006-2010.