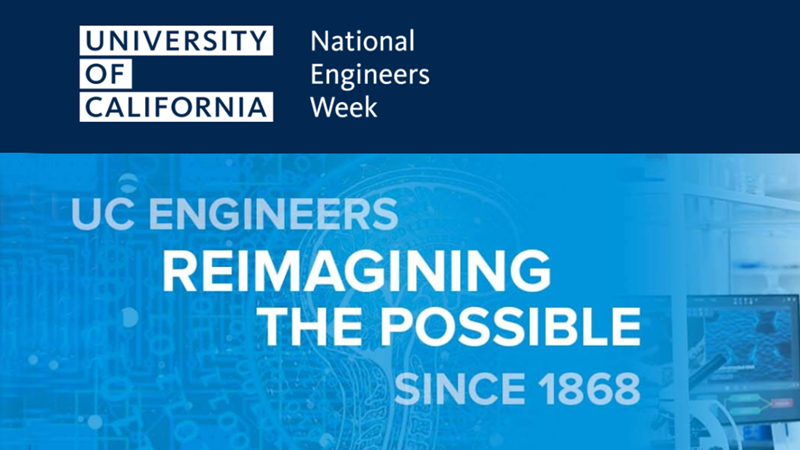 UCLA Samueli
Every year during the week of President George Washington’s birthday, engineers from across the country come together to celebrate all the incredible work engineering can create — and the bright and innovative engineers from the University of California are no exception.

The National Society of Professional Engineers established National Engineers Week in 1951 to honor Washington’s many monumental contributions to engineering, including the establishment of the U.S. Army Corps of Engineers in 1775. The week is now celebrated by a formal coalition of 70 engineering, education and cultural societies as well as more than 50 corporations and government agencies.

Each day during the week of Feb.21-25, UC campuses honored the national tradition with a social media campaign called the “UC Engineers Week” that focused on reimaginations of what is possible. These included a video highlighting the impressive engineering-related statistics among the UC campuses, human health, sustainability, artificial intelligence and innovation. From a UCLA technology that turns carbon dioxide into concrete that won an XPRIZE to UC Berkeley innovations that use AI to understand inequality, the magnitude of innovation that came out of UC campuses is astounding.

With more than 45,000 engineering students across all campuses, there was no shortage of exciting and diverse breakthroughs. At UC Irvine, biomedical engineers are growing new skin, retinal tissue, livers, hearts and more that have the potential to heal the human body in new ways, including possibly allowing people to travel to other star systems. Up north, faculty at UC Santa Cruz are developing therapies that help people with disabilities to live more independently. And at UC Davis, the College of Engineering opened its Coffee Center, the world’s first academic research center focused on studying the morning beverage.

And here at UCLA Samueli, we are celebrating a highlight reel of our own innovations. Virtually everyone who works or learns on campus has used SwabSeq’s COVID-19 test from the vending machines, while Amazon’s first partnership with a public university created the Science Hub for Humanity and Artificial Intelligence. And who can forget the soft, squishy and flexible robots that look right out of a science fiction movie but are as real as can be.

For a peek at the University of California’s collective impact to engineer positive change, visit this website to learn more about how the UC celebrated National Engineers Week 2022.