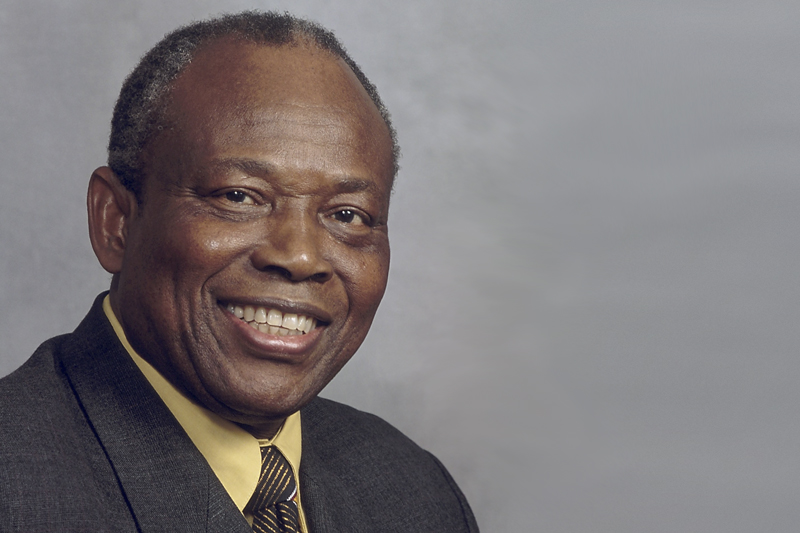 More than 55 years after earning his bachelor’s degree from UCLA Engineering, Augustine Esogbue still recalls fondly his time at the school.

Having immigrated to the U.S. from his native Nigeria in the early 1960s to pursue an engineering career, Esogbue excelled in his studies at UCLA. He did feel lonely at times, he said, noting he was the only Black student in nearly all his engineering classes.

“I did not consider the challenge of being the only Black in my classes a major liability,” Esogbue said.

In addition to being a Bruin engineer, Esogbue was immersed in other fulfilling campus activities. This included a leadership position as Inaugural Executive Member of the International Affairs Council, as a letterman in the UCLA soccer squad, which was unbeaten for four years in the Pacific Coast Conference, as well as being a language instructor to the U.S. Peace Corps Nigeria group that trained at UCLA.

“To cap it all, at the graduation awards banquet in 1964, I was honored by then-Los Angeles Mayor Sam Yorty with the Honorary Citizen of Los Angeles Award,” Esogbue recalled.

Following graduation from UCLA in 1964, Esogbue continued his academic pursuit, earning a master’s degree in industrial engineering and operations research from Columbia University in New York City in 1965, and a Ph.D. in industrial and systems engineering/operations research from USC in 1968. He said he was the first Black person to earn that degree.

In 1972, after a stint on the faculty of the Department of Operations Research at Case Western Reserve University in Cleveland, Ohio, Esogbue joined the engineering faculty at Georgia Tech as an associate professor of industrial and systems engineering and a joint appointment with Health Systems Research Center. In 1977, he was promoted full professor with tenure, becoming the first Black person ever to attain this feat in the university’s history.

He specialized in dynamic programming, fuzzy sets, optimization and control methods of operations research and systems engineering with applications in areas such as health care, water resources and pollution, as well as disaster-control planning.

Esogbue remained at Georgia Tech throughout the rest of his career, and was a faculty member in its consistently top-ranked School of Industrial and Systems Engineering. He continued to teach and conduct pioneering research until his retirement, becoming a professor emeritus in 2012.

Beyond his achievements in academia, Esogbue dedicated much of his career to serving as a role model and mentor for generations of Black engineering students at Georgia Tech, including being the founding faculty advisor to the school’s chapter of the National Society of Black Engineers (NSBE), which has won numerous national and distinguished chapter of the year awards. He was also an advisor to the national organization from 1989 to 2014, when he was named national advisor emeritus

In February of 2006, Esogbue was honored by NASA with its Public Service Medal for his “leadership, dedication, and commitment to NASA as a Member of the NASA Aerospace Safety Advisory Panel.” The citation concluded that Esogbue’s “contributions will benefit the nation for generations to come.”

In December of the same year, he was awarded Nigeria’s highest national merit prize, the Nigerian National Order of Merit, for intellectual and academic attainment.

In 2010, Esogbue received UCLA Samueli’s Alumni Achievement in Academia Award, one of the school’s highest honors, for his distinguished career.

While Esogbue has officially retired from teaching and research, he remains active in serving the international scientific community, including at both the science and engineering academies of Nigeria, the Georgia Tech community and an array of civic organizations in Atlanta, where he resides.

Nearly six decades have gone by since Esogbue left his alma mater at UCLA and despite living more than 2,000 miles away from Los Angeles, Esogbue has always remembered his experiences at UCLA, where he built a solid foundation for his illustrious career.

“There is a limited representation of minorities, particularly Blacks in engineering and the technical fields,” Esogbue said. “We have shown elsewhere that we can change this through appropriate intervention mechanisms. I believe that successful Black leaders and institutions, in particular, have a unique role to play in turning the situation around”.

Toward that goal, he recently gave a gift, through the Centennial Campaign for UCLA, to endow an undergraduate scholarship at UCLA Samueli — one that aims at identifying and supporting high-achieving engineering students who are involved with NSBE, and who exhibit a deep interest, and commitment to, completing an advanced degree in engineering.

Esogbue decided to fund another scholarship at UCLA by creating the Esogbue Leadership Award to honor students of high scholastic achievement who also exhibit leadership acumen and leave lasting imprints in the UCLA community. The inaugural recipient is Saimon Hagdu, a civil engineering major who is this year’s treasurer for NSBE at UCLA.

“I really want to give back to my alma matter UCLA strategically by changing an undesirable situation that existed in my time, some 60 years ago, and yet persists today,” Esogbue said. “In the process, UCLA Samueli would become a vehicle for contributing to the solution of a national problem as well as the fulfillment of NSBE’s mission — to increase and support Black engineers who excel academically, have success professionally and who positively impact their communities.”

Beyond financial support, Esogbue also hopes that the scholarship will enable other Black students interested in STEM careers to follow the path of previous awardees who, despite similar challenges, found a way to excel in their profession. He also hopes it will encourage more Black students to pursue advanced degrees and join the engineering professoriate, thus becoming mentors to those in their early stages of their engineering careers.

“With excellent role models, you can show them that someone who looks like them can excel in this field,” Esogbue said. “There is utility in belonging in this field. You can see a professional who is really on the right pathway to success in America.”

Esogbue said he hopes news of his scholarships will spur other alumni and friends of the school to consider making a gift of support to a program that changes lives and contributes to the solution of societal problems facing America and the world.

“I am doing this not because I have money; I am not rich,” Esogbue emphasized. “But I really appreciated the opportunity I had at UCLA coming from Nigeria soon after [it gained] independence. I hope that other people can hear about this scholarship and contribute to the school. If somebody like me can do this, I think others who have resources can as well.” Alumni and friends of UCLA interested in supporting diversity efforts can give to a fund dedicated to increase diversity in engineering. Those interested in creating an endowed scholarship for undergraduate students or fellowship for graduate students can contact a member of the school’s Office of External Affairs.