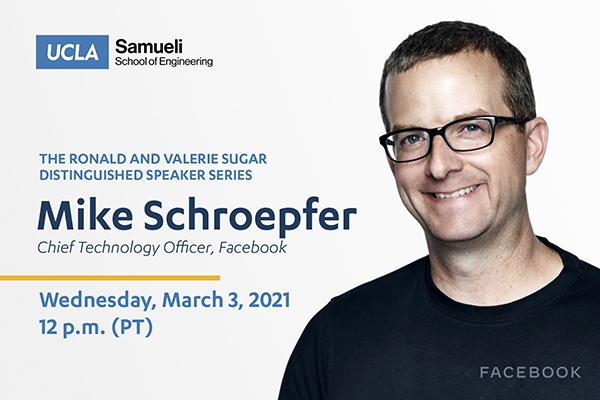 Dean Jayathi Murthy invites you to a very special speaker series featuring Mike Schroepfer, Chief Technology Officer at Facebook. Join us as we discuss emerging technologies that will shape the future of social media.

Mike leads the development of the technology and teams that connect billions of people around the world through major advancements in fields like artificial intelligence and virtual reality. Prior to Facebook, he was Vice President of Engineering at Mozilla Corporation where he led the global and open product development of the Firefox browser. He began his career working at startups, including a digital effects company where he developed software used in major motion pictures. Mike holds a bachelor’s and master’s degree in computer science from Stanford University.

This conversation on the cutting-edge technologies being deployed by Facebook will be moderated by John Villasenor, a professor of electrical engineering and law at UCLA and director of the UCLA Institute for Technology, Law and Policy. Villasenor has published many articles, including in Forbes, the Los Angeles Times, the New York Times and the Washington Post.

We hope that you can join us for this once-in-a-lifetime event!