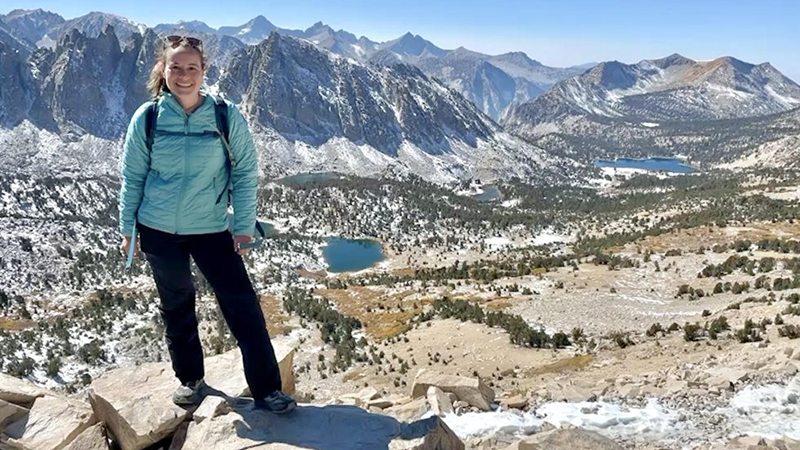 UCLA Samueli Newsroom
UCLA civil engineering doctoral student Manon von Kaenel is helping to solve one of hydrology’s biggest unsolved problems — How to accurately measure snowmelt? She has recently won a NASA fellowship that will enable her to explore potential solutions.

After applying for the highly competitive Future Investigators in NASA Earth and Space Science Technology (FINESST) fellowship three years in a row, von Kaenel finally received the award this year, making her one of only 53 graduate student recipients out of 835 applicants from across the country.

Working with professor Steven Margulis of civil and environmental engineering at the UCLA Samueli School of Engineering, von Kaenel has been developing methods to better estimate snow water resources in real time, which will in turn provide much-needed data for water management.

“I like problem solving and more application kind of things. So that engineering approach was definitely appealing to me,” von Kaenel said.

A lover of nature and the outdoors, von Kaenel spent much of her childhood going to the Sierra Nevada, camping, backpacking and skiing — all of which gave her a strong appreciation and respect for the natural environment. That’s also why she decided to pursue a bachelor’s degree in environmental science and geography at UC Berkeley. She then spent several years working at an environmental nonprofit doing water resources modeling and water management, and where she realized that she wanted to pursue an advanced degree in engineering with the focus on hydrology.

“I like problem solving and more application kind of things. So that engineering approach was definitely appealing to me,” she said.

When it came time to pick a graduate program, von Kaenel chose UCLA for two main reasons: The location allowed the native Californian to stay in the state she calls home, and it gave her a chance to work with Margulis, whose research interests align well with her own.

“Manon’s questions about the program and research made it clear she was very motivated and interested in doing research with a strong societal impact,” Margulis said. “She is not afraid to speak up and show leadership skills. This comes through in both research and teaching environments.”

For her research, von Kaenel focuses on ways to better estimate snow water trapped in a snowpack. In a drought-prone state like California, there is increasing demand for water that comes from melting snow to irrigate farmland and supply water for homes and industries. In fact, 75% of the water supply in California comes from snowmelt, and many major cities depend on water that comes directly from the Sierras, where von Kaenel’s research is based. So knowing the amount of snow water in a snowpack is of great importance when it comes to water management. However, there is currently not a reliable way to gather these data in real time in a way that is representative of snow water distribution over space and time.

“Snow water is incredibly difficult to actually measure and estimate,” von Kaenel said. “Mountains are topographically varied, so the amount of snow from one spot to the next is going to vary a lot.”

Technologies, such as remote sensing satellites, exist to aid in the measurement of snow packs and their snow water equivalents, but they are not ready to be integrated into current water management systems. Working with Margulis’ research group, von Kaenel is attempting to develop a metric framework leveraging existing data from NASA to estimate snow water or snow water equivalent. The estimates can then be used to develop real-time, improved runoff and streamflow forecast in snow-influenced communities for water resource managers.

Through her work, von Kaenel said she hopes people will be able to make smarter decisions about water management, including how to use reservoirs and get a better forecast for potential droughts in the future. This is especially critical in California, which is vulnerable to severe droughts because of significant fluctuations in precipitation patterns caused by global warming.

“The current system that we have for decision-making around water management is not going to be sustainable in the future because it’s based on historical patterns that are becoming more complicated due to climate change,” von Kaenel said. “Getting real-time information is going to be incredibly important in order to facilitate smarter decisions.”

With the NASA fellowship, von Kaenel said she is excited to have the chance to expand upon the work she is doing with Margulis and dive deeper into the sociological and economic impacts of climate change.

“One of the best pieces of advice I’ve ever received in the context of deciding my academic path was to pick something that genuinely excites you and that you could talk about on your time off,” von Kaenel said.

Before embarking on her academic journey at UCLA, von Kaenel spent a great deal of time working in South America, where she studied how climate change affected the snow-dependent communities in the continent.

“I’m really interested in the real-time snow applications, which is what I received the NASA fellowship for, but also looking at vulnerabilities across the globe and snow-dependent or snow-influenced communities and societies,” von Kaenel said. She also would like to learn more about how to address these challenges and effect meaningful change in the water supply system outside of academia

When she isn’t neck-deep in research, von Kaenel stays involved in the STEM community as part of the leadership of the Graduate Society of Women Engineers at UCLA. Currently the mentorship coordinator, she was co-president of the organization for two years.

Female representation in STEM is critical, von Kaenel said. Without it, future women engineers may be discouraged when they don’t see people like themselves in positions of authority in the engineering field.

“I’m very proud to be a woman in STEM,” von Kaenel said. “I want to help younger versions of me to see that that’s possible. It was very hard for me to shift into engineering because of imposter syndrome, lack of representation, lack of role models, etc. I want to ease that path for future female scientists and engineers.”

For those interested in STEM but are not sure about what track to pursue, von Kaenel has this to say. “One of the best pieces of advice I’ve ever received in the context of deciding my academic path was to pick something that genuinely excites you and that you could talk about on your time off,” von Kaenel said. “And for me, that’s mountains and snow. I think the key is to have fun, enjoy yourself and make sure you are interested in what you’re doing. So if that’s the path that brings you joy, then absolutely go for it. It’s worth it.”