Advance could lead to better understanding of astronomical events such as solar flares and gamma ray bursts, and effects observed in scientific experiments in high-energy synchrotrons and storage rings.

A research team from the UCLA Samueli School of Engineering has developed a way to study how plasmas – the state of matter that stars are made of – behave leading up to astronomical and cosmic events such as solar flares and gamma-ray bursts. The study was published in Science Advances.

Plasma is generally known as the fourth state of matter– it’s a superhot gas that has its atoms stripped of their orbiting electrons that then roam free inside the plasma.  While its constituent parts, free electrons and ions, are both charged, their charges are equal but opposite and cancel each other out. Consequently, the plasma itself is electrically neutral. Nearly all the observable matter in the universe is composed of plasma, including stars, as well as the Earth’s own magnetosphere and the Van Allen radiation belts.

In an equilibrium, or stable state, plasma electrons and ions have a “bell-shape” velocity distribution in all three dimensions. In other words, they’re moving around in different directions and at different speeds, but no single direction dominates.

Theory of such instabilities has been one of the foundational pillars of plasma physics, but experimental tests confirming it have been limited to date. A laboratory platform that can create plasmas with known anisotropic electron velocity distributions was lacking.

Now, the UCLA team has shown a rather straightforward approach of producing such non-equilibrium plasmas. They ionized helium atoms using an ultrashort laser pulse and measured the growth of a variety of kinetic instabilities using scattering of a second probe laser pulse.

Their results show that in this plasma, these instabilities can grow in just a few trillionths of a second.  This has never been done before. It has allowed the authors to validate the state-of-the-art computer codes that can now be used with confidence to predict the behavior of these instabilities in outside the laboratory. 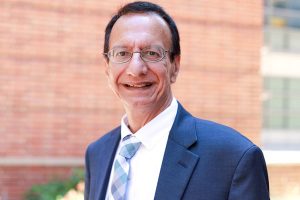 “This study solves a nearly 60-year-old problem in plasma physics, and will help scientists in understanding astronomical phenomena, and undesirable effects seen in high energy accelerators,” said Chan Joshi, distinguished professor of electrical and computer engineering and the group leader of the study.

The research team included postdoctoral scholar Chaojie Zhang, the paper’s first author; and Warren Mori, professor of physics and astronomy, and of electrical and computer engineering. Other authors of the paper are engineers Ken Marsh and Chris Clayton, and graduate student Chen-Kang Huang, all members of Joshi’s research group.