These ‘superlattices’ could lead to improvements in electronics, from transistors to LEDs

For example, while one layer of this new kind of superlattice can allow a fast flow of electrons through it, the other type of layer can act as an insulator. This design confines the electronic and optical properties to single active layers, and they do not interfere with other insulating layers. 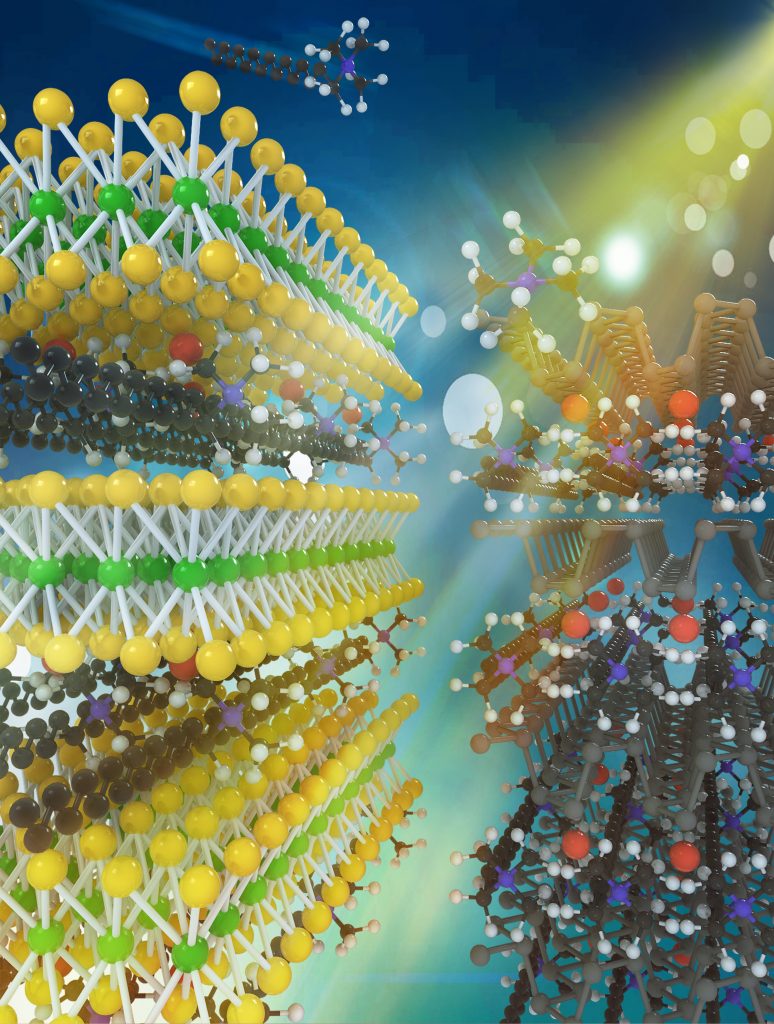 Such superlattices can form the basis for improved and new classes of electronic and optoelectronic devices. Applications include superfast and ultra-efficient semiconductors for transistors in computers and smart devices, and advanced LEDs and lasers.

Compared with the conventional layer-by-layer assembly or growth approach currently used to create 2D superlattices, the new UCLA-led process to manufacture superlattices from 2D materials is much faster and more efficient. Most importantly, the new method easily yields superlattices with tens, hundreds or even thousands of alternating layers, which is not yet possible with other approaches.

“Traditional semiconductor superlattices can usually only be made from materials with highly similar lattice symmetry, normally with rather similar electronic structures,” Huang said. “For the first time, we have created stable superlattice structures with radically different layers, yet nearly perfect atomic-molecular arrangements within each layer. This new class of superlattice structures has tailorable electronic properties for potential technological applications and further scientific studies.”

One current method to build a superlattice is to manually stack the ultrathin layers one on top of the other. But this is labor-intensive. In addition, since the flake-like sheets are fragile, it takes a long time to build because many sheets will break during the placement process. The other method is to grow one new layer on top of the other, using a process called “chemical vapor deposition.” But since that means different conditions, such as heat, pressure or chemical environments, are needed to grow each layer, the process could result in altering or breaking the layer underneath. This method is also labor-intensive with low yield rates.

The new method to create monolayer atomic crystal molecular superlattices uses a process called “electrochemical intercalation,” in which a negative voltage is applied. This injects negatively charged electrons into the 2D material. Then, this attracts positively charged ammonium molecules into the spaces between the atomic layers. Those ammonium molecules automatically assemble into new layers in the ordered crystal structure, creating a superlattice.

“Think of a two-dimensional material as a stack of playing cards,” Duan said. “Then imagine that we can cause a large pile of nearby plastic beads to insert themselves, in perfect order, sandwiching between each card. That’s the analogous idea, but with a crystal of 2D material and ammonium molecules.”

The researchers first demonstrated the new technique using black phosphorus as a base 2D atomic crystal material. Using the negative voltage, positively charged ammonium ions were attracted into the base material, and inserted themselves between the layered atomic phosphorous sheets.

Following that success, the team inserted different types of ammonium molecules with various sizes and symmetries into a series of 2D materials. They found that they could tailor the structures of the resulting monolayer atomic crystal molecular superlattices, which had a diverse range of desirable electronic and optical properties.

“The resulting materials could be useful for making faster transistors that consume less power, or for creating efficient light-emitting devices,” Duan said.

The lead author of the study is Chen Wang, a doctoral student advised by Huang and Duan, who are both members of the California NanoSystems Institute. Other study authors are UCLA graduate students and postdoctoral researchers in Duan or Huang’s research groups; researchers from Caltech; Hunan University, China; University of Science and Technology of China; and King Saud University, Saudi Arabia.

The research was supported by the National Science Foundation and the Office of Naval Research.