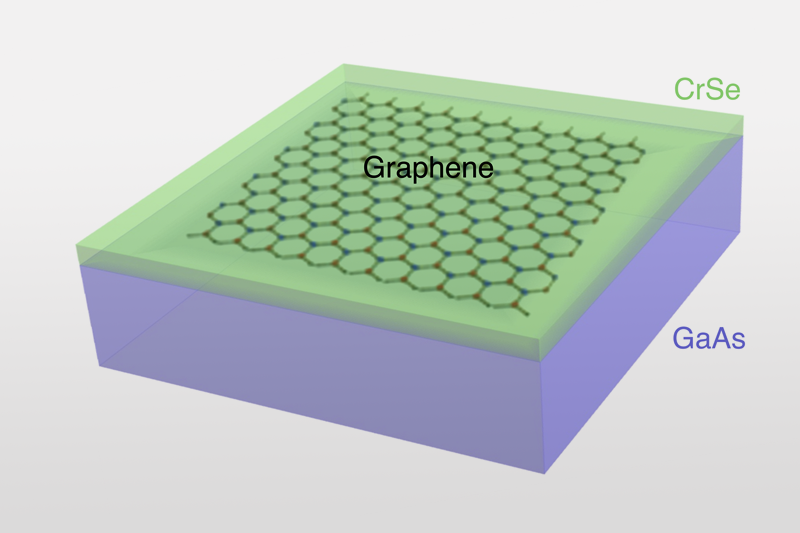 Kang L. Wang Research Group
Depiction of a layer of graphene (hexagonal tiles) over a thin film of chromium selenide. Both are over a substrate of gallium arsenide.

UCLA engineers and colleagues have demonstrated a more practical way to magnetize graphene — one atom-thin carbon known for its notable heat and electricity-conducting properties — by adding a thin film of the chemical compound chromium selenide. According to the study published in Nature Electronics, the newly magnetized material, which is about 30 nanometers thick (three hundred-thousandths of a millimeter), could be incorporated into computer memory and processors that utilize spintronics instead of electronics.

The study was led by Yingying Wu, an electrical and computer engineering doctoral student at UCLA Samueli School of Engineering and Kang Wang, the Raytheon Professor of Electrical Engineering. Author Gen Yin, an assistant professor of physics at Georgetown University, who was a project scientist at UCLA’s Device Research Lab at the time of the study.

Spintronics uses an electron’s spin and orbital properties, rather than its charge (as in the case of electronics), to carry information and energy. Computers with memory and processors based on spintronics could consume much less power, emitting minimal heat while offering much faster speeds.

Graphene, with its excellent conducting properties that allow an electron’s spin to move with ease is one material that could be used in spintronics.

The up-and-down spins can store and transfer bits of information just as “zeroes” and “ones” do. Graphene facilitates unimpeded electron spins, which translate into faster computer speeds.

However, one of the challenges of using graphene is that it is magnetically neutral, meaning the direction of electron spins is random and cannot be controlled. Previous attempts by others have attained magnetization, using an external magnetic field or connecting the graphene to a strong magnet. But this can lead to other issues, such as interference.

Based on the measurement of the quantum current running in such material, the UCLA researchers confirmed that the spin-splitting energy inducted in graphene introduces a very high level of magnetization into a material not naturally magnetic. This helps make graphene an excellent generator of pure spin current without heat, which significantly reduces power consumption.

The other authors on the paper are Lei Pan, Quanjun Pan and Albert Lee of UCLA; Alexander Grutter, Dustin Gilbert, Julie Borchers and William Ratclliff II at the NIST Center for Nanoscale Science and Technology in Gaithersburg, Maryland; and Ang Li and Xiao-dong Han at Beijing University of Technology.

The research was supported by a Multidisciplinary University Research Initiative (MURI) sponsored by the Army Research Office and the Spins and Heat in Nanoscale Electronic Systems Center (SHINES) — an Energy Frontier Research Center (EFRC) funded by the U.S. Department of Energy and headquartered at UC Riverside. Additional support was provided by the National Science Foundation. In addition to research conducted at UCLA, some of the study was performed at NIST Center for Nanoscale Science and Technology in Gaithersburg, Maryland.