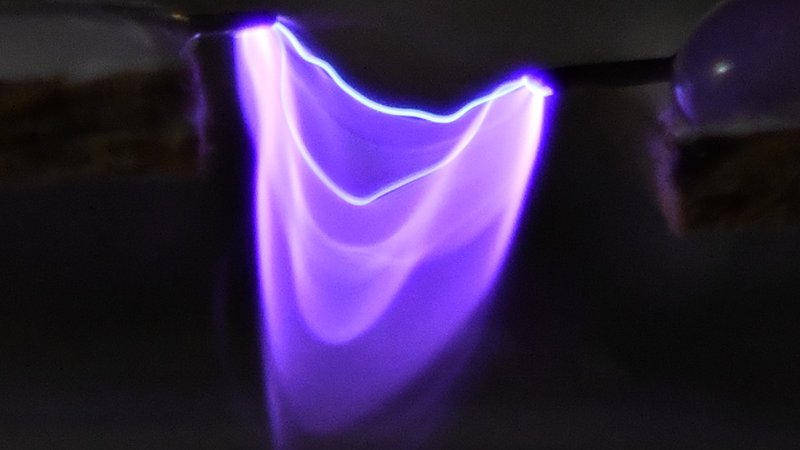 Image Credit: Richard Wirz/UCLA
Closeup of the plasma generated by the aCAP device

UCLA Samueli Newsroom
Cancer recurrence after surgeries to remove tumors remains a major risk for millions of patients every year. While treatments such as chemotherapy and radiation are often used in combination with surgery, they can also lead to multiple complications.

UCLA engineers are looking at ways to address this problem by developing a new device that generates near-room-temperature ionized gas for post-surgery treatment that eliminates residual cancer cells at the surgery site with minimal adverse side effects.

Science Advances recently published the research co-led by Richard Wirz, a professor of mechanical and aerospace engineering at the UCLA Samueli School of Engineering; and former UCLA bioengineering professor Zhen Gu, who is now the dean of the College of Pharmaceutical Sciences at Zhejiang University in China. Wirz and Gu have previously collaborated on other research using plasma for biomedical applications.

Ionized gas, or plasma, is the fourth state of matter — most often experienced as lightning, which was the inspiration behind the plasma-generation technique for this technology. The research team built a handheld, air-fed cold atmospheric plasma — or “aCAP”— device that uses ambient air as its feed gas.

In contrast with lightning, the patent-pending “aCAP” device uses tiny plasma arcs that require less than a trillionth of the gigajoule power of a natural atmospheric electrostatic discharge. The system generates near-room-temperature plasma, also called “cold plasma,” with these arcs ionizing a jet of ambient air by stripping away some of the electrons from the air molecules. It is safe to touch, feeling like a cool breeze across the skin or static electricity at higher powers.

In medicine, cold atmospheric plasma is emerging as a promising technology for wound healing, sterilization, dentistry and a variety of other applications. More recently, researchers turned their attention toward using the advance to kill cancer cells, noting that cold plasmas have already been shown to kill bacteria in several ways — such as destroying their cell membranes, cell walls, and DNA and RNA, as well as unraveling proteins.

The team first tested the technology in vitro on breast cancer tumor cells and melanoma cells, showing its effectiveness in killing the target cells while leaving healthy cells intact. They then tested on mice with tumors that were surgically removed. Compared to the control group, a significant percentage of the mice that were treated with the cold plasma showed no signs of tumor regrowth and no visible adverse reaction. In addition, there has been an increase in the activity of T cells — part of the immune system that kill unwanted cells.

According to the researchers, another advantage of this system is that it only requires air-intake through a small inlet fan, similar to those used for cooling laptop computers. This avoids the high costs and complexity of conventional cold plasma devices that depend on specialized systems for feed gases, such as argon or helium. The researchers are in the process of optimizing the design of the device and conducting tests on larger animals to better simulate human conditions.

The co-first authors on the research are Guojun Chen and Zhitong Chen — former postdoctoral researchers in Gu’s and Wirz’s labs at UCLA, respectively.

The research was supported by the National Institutes of Health, the Air Force Office of Scientific Research, the Jonsson Comprehensive Cancer Center at UCLA and scientific agencies in China and Canada.