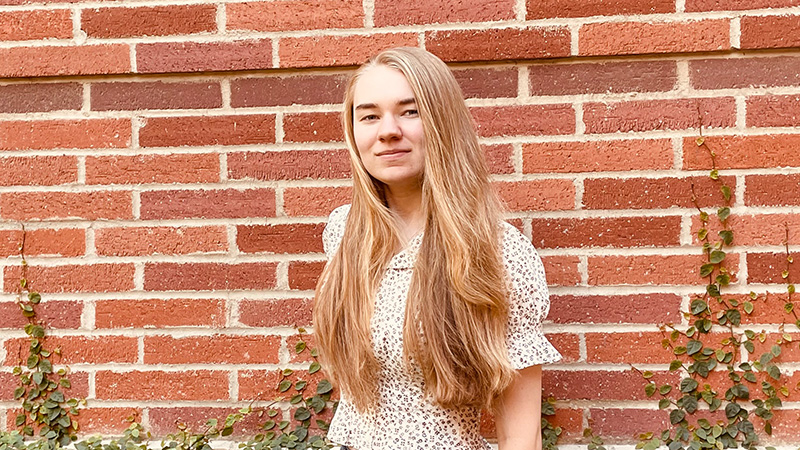 Fourth-year chemical engineering student Alex Pheiffer said she knew she wanted to pursue engineering long before entering college, even though the major turned out to be different from what she originally anticipated.

“Chemical engineering is more about process design, fluid mechanics — math and physics more than just chemistry,” said Pheiffer, who was inspired by her engineer father to follow suit. “It turns out I like this a lot more than I thought I would, and I’m really glad I was able to pursue this throughout my time in undergrad.”

At UCLA, Chemical Engineering 100: “Fundamentals of Chemical and Biomolecular Engineering,” was Pheiffer’s first and favorite chemical engineering upper division course. She attributes her love of programming and problem-solving to the skills taught by assistant professor Yuzhang Li. Even though Pheiffer found the coursework difficult, she said that Li’s instructional approach set her up for later success.

“I think I used things learned in this class in every single upper division course I took thereafter,” Pheiffer said.

“UCLA has given me the tools I need to succeed, including learning how to manage my time between technical aspects of a project and communication of successes,” Alex Pheiffer said.

One of the ways Pheiffer continues to apply the skills she learned from her chemical engineering courses is through her participation in UCLA’s chapter of the American Institute of Chemical Engineers (AIChE). During her freshman year, Pheiffer was paired with an upperclassman mentor who introduced her to the student organization’s Chem-E-Car project, whose members make shoe-box sized cars that can move and stop completely based on chemical reactions produced onboard the vehicle. Three UCLA Chem-E-Car teams (a one-year team and two two-year teams) of seven or eight members each enter an annual regional competition organized by AIChE’s professional national flagship.

Pheiffer made the cut to be on a Chem-E-Car team her sophomore year just before the COVID shutdown, so the team had to research its car’s mechanism remotely. This proved to be helpful the following year, when Pheiffer was in charge of designing the car’s electronics and programming, including the circuit. She implemented a gyroscope designed to determine the yaw values of the car (how much it veers left and right) and control a servo to turn the car. It turned out to be a huge success and her team placed first in the regional competition this past spring and is on its way to the national competition in Arizona this month.

In addition to working on the national team where she is in charge of the programming and electronic setup of the car, Pheiffer is also leading a new one-year team, managing and training her teammates for the regional Chem-E-Car competition in April. Her team is using a zinc-air battery and a motor to power its car and a vitamin C iodine clock for its stopping mechanism.

“Being a project lead allows me to guide this year’s teams in what we learned from the past year and to be able to continue to learn from the project as a whole,” she said. “I have devoted so much of my time to Chem-E-Car, it’s hard to not imagine myself here now.”

Pheiffer said she has taken several computer science classes while at UCLA to supplement her chemical engineering coursework and fulfill her curiosity and interest in programming. Applying her skills and knowledge in both software engineering and chemical engineering in Chem-E-Car has taught her a greater range of problem-solving skills and allowed her to approach problems from different perspectives.

She recently finished a summer internship at Procter & Gamble in Cincinnati. Working in the company’s feminine care products department, she performed data architecture and analysis on its control system data using a cloud computing and management platform. Even though her internship at the consumer goods giant was focused less specifically on chemical engineering, Pheiffer found it invaluable because it provided her with real-world engineering experience that challenged her to think outside the box and offered her the chance to apply what she learned in her UCLA classes to new problems.

“In reality, being an engineer is more important than what you might’ve learned specifically in college,” Pheiffer said. “A lot of what I had to do was related to my past experience in problem-solving and understanding others’ solutions.”

On course to graduate in spring, Pheiffer said she plans to return to Procter & Gamble as a controls engineer. With her Chem-E-Car experience and interest in programming, she said she looks forward to learning more about programmable logic computer (known as PLC) programming and ladder logic — both common in industrial manufacturing.

“UCLA has given me the tools I need to succeed, including learning how to manage my time between technical aspects of a project and communication of successes. I continue to desire to learn,” said Pheiffer, who might consider pursuing an advanced degree in the future.