UCLA Engineering Senior on Being a Bruin Entrepreneur 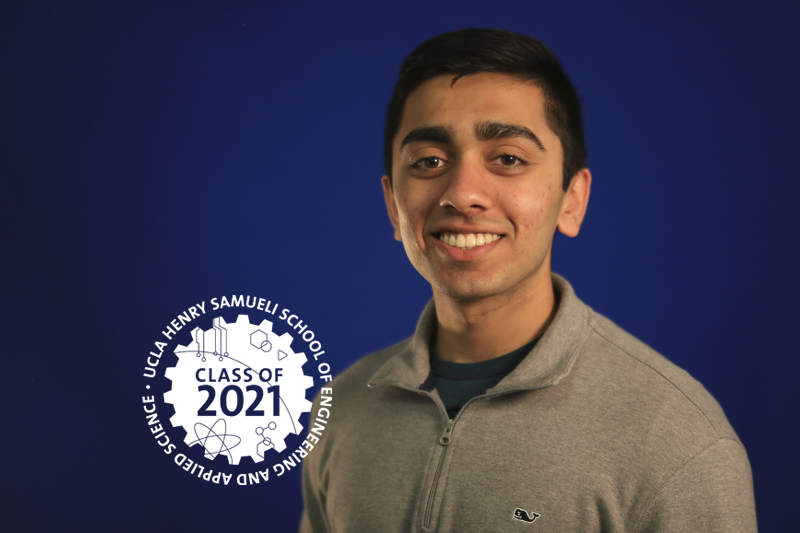 When Yash Moondhra first came to UCLA, he used to stand in front of Jackie Robinson’s statue every day, feeling amazed that legendary alumni like Robinson had walked the same steps as he did. Moondhra realized then that UCLA is where anything is possible.

That inspiration led Moondhra, a fourth-year computer science student, on a path toward entrepreneurship despite initially having limited software engineering skills and no professional network. He first landed a part-time job at a small startup through a career fair hosted by the UCLA Samueli School of Engineering.

It was in a math class in 2019 when Moondhra first met fellow UCLA student David Lin, a business and economics major from North Campus. Lin had recently founded the Duffl online app and serves as the chief executive officer. Co-founded by electrical engineering student Brian Le, the app offers a delivery service using electric scooters for UCLA students — on and off campus. The startup is billed as a “one-stop shop for groceries, snacks and toiletries delivered sustainably.”

At the time, Duffl was in its early stage of setup about to be accepted into the startup accelerator, Y Combinator to help the company refine its business model. Moondhra was in charge of developing the company’s software and conducting data analysis as the firm’s chief technology officer. He worked on many aspects of the online app, from designing the website to optimizing the supply chain.

From its humble beginning as a scrappy apartment startup at UCLA, Duffl evolved into a successful business generating more than $1 million in annual revenue. Today, the company serves college campuses across California. Since its inception, Duffl has delivered nearly 100,000 orders to approximately 10,000 students.

“Coming into college, I had almost none of the technical skills required to launch a startup,” Moondhra said. “UCLA Engineering allowed me to meet ambitious thinkers and develop the technical skills for building Duffl. The school has been indispensable to my experiences.”

Still an investor with Duffl, Moondhra left his official role at the company last September after befriending an executive at Robinhood, a financial services company that offers users the ability to trade stocks via an app.

Looking back on his academic journey, Moondhra still remembers how difficult it was in the beginning for his family.

Like many immigrants, Moondhra’s parents came to the U.S. with little money and struggled to make ends meet. Eventually, they worked their way up the corporate ladder and settled down in South Florida with their two sons.

“My parents taught me to deeply value gratitude and diligence,” Moondhra said. “Their diligence taught me an important lesson: Sometimes, we must leave behind the good in order to achieve the great.”

At UCLA, Moondhra stays busy outside of the classroom, having served as director of engineering for Bruin Entrepreneurs until he joined Duffl in early 2020. He encouraged every team member to take the lead on a project and found it rewarding to witness their growth.

Soon to graduate with a bachelor’s degree this fall, Moondhra has already joined Robinhood as a full-time software engineer while finishing a final course at UCLA. He recently wrote an article, sharing his experience working in a Silicon Valley community of innovators last summer in the midst of the pandemic.

As he embarks on a new journey after UCLA, Moondhra says his ultimate goal is to have a positive influence on others. “I want to inspire people to live for a purpose that gives them a deep sense of fulfillment,” Moondhra said. “I hope to build a company that challenges the status quo and brings positive change to the world.”