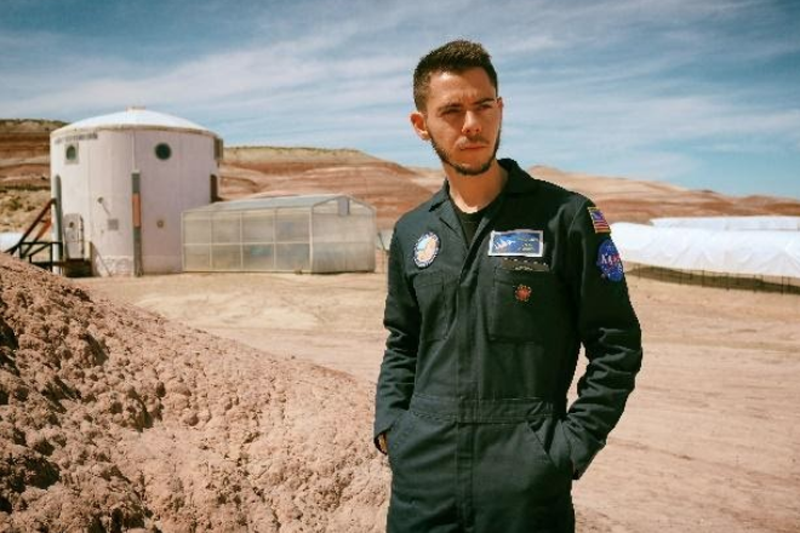 Dylan Dickstein, a Ph.D. candidate in aerospace engineering, is back to everyday life on Earth after leading a two-week Martian simulation experiment this past spring.

Dickstein, who is expected to obtain his doctoral degree this fall from the UCLA Samueli School of Engineering, successfully commanded a multidisciplinary team of six students and recent graduates from UCLA and other universities at the Mars Desert Research Station (MDRS) astronaut analog. Owned and operated by the nonprofit Mars Society, the facility is located near Hanksville, Utah. MDRS supports Earth-based research in pursuit of the technology, operations and science required for human space exploration.

Acceptance to the highly competitive MDRS program is a notable achievement. Previous participants include NASA astronaut and UCLA geology alumna Jessica Watkins, Ph.D. ’15. Watkins is currently in training for NASA’s Artemis program scheduled for a 2024 mission to the moon.

“I have looked up to astronaut Watkins for years now, and it is an honor to conduct research at the same facility,” Dickstein said. “The high fidelity of MDRS missions makes them a valuable training ground for prospective astronauts, and it is validating to see past participants recognized for their performance while in simulation.”

Dickstein’s experience was particularly rare as he and his teammates were part of the first full rotation since March 2020 when the pandemic hit. All other 2020-2021 MDRS field missions were canceled or delayed at least one season, and the next rotation will not take place until this fall. Dickstein and his U.S.-based crewmates were all at least partially vaccinated and sufficiently quarantined when they began the April 11-24 mission.

“COVID was a major roadblock, but we kept pushing forward with plans to enter simulation in April,” Dickstein said. “We were fully prepared when we got the official ‘Go for Mission’ from the program director early this year.”

Charged with the task to command the simulation, Dickstein began to assemble the team two years ago recruiting individuals with compatible personalities and a diverse set of skills and backgrounds. He selected his teammates from former internship and research colleagues, as well as peers from the Matthew Isakowitz Fellowship program — a summer internship and networking program designed to bring together students and mentors interested in commercial spaceflight.

In addition to commander Dickstein, the other MDRS Crew 245 members include crew scientist Olivia Ettlin ’20, a UCLA graduate in molecular, cell and developmental biology who currently works as a lab technician at Caltech; health and safety officer Alex Coultrup from Florida Institute of Technology and the International Space University who works on spacecraft architecture at Nanoracks; executive officer Shayna Hume who is researching Entry, Descent, and Landing for her Ph.D. at CU Boulder; crew botanist Julio Hernandez who is a Ph.D. candidate at Purdue University studying structural health monitoring for aircraft and spacecraft; and crew engineer Shravan Hariharan, a graduate student at MIT where he researches Martian In-Situ Resource Utilization.

The crew is also called “Team Patamars,” named after a type of sailing vessel and chosen for its nod to the simulated location. The team executed a variety of scientific experiments, including several extravehicular activities (EVAs) around the research station. The Mars Society founder and aerospace engineer Robert Zubrin suggested that the team gather soil samples as part of the EVAs. The exercise is to help demonstrate the search for extremophiles, microorganisms that live in conditions of extreme temperature, acidity, alkalinity or chemical concentration in Martian landscapes.

Team Patamars also performed an experiment to identify emergency shelter locations and create figures of merit to rank each shelter. They used GPS devices to mark the shelter positions for fellow teammates to find the locations later in the mission.

Led by Ettlin, two botany experiments — a hydroponics garden and a Martian regolith viability study — were made possible by means of the onsite greenhouse and science laboratory.

In addition, each crew member participated in a feasibility study on dexterity to better understand spacesuit glove limitations. Coultrup also periodically interviewed the crew about their personal habits and commitment to strict simulation protocols despite the isolation and demanding workload associated with the mission.

While the technical aspects of the analog give the simulation a sense of purpose, Dickstein said it is up to each individual crew member to conduct research that will help inform in-space experiments carried out by astronauts.

“Choosing the right experiments, executing them with precision and analyzing them scrupulously plays a commanding role in the significance of the overall mission,” Dickstein said. “It was an incredible privilege to perform research at the Mars Desert Research Station and we were conscientious to not take any moment for granted.”

Dickstein plans to continue pursuing his dream of working in space after UCLA. As part of his ongoing training, he will log more flight time flying private planes, getting additional scuba dives under his belt and undertaking other astronaut simulations. Dickstein will also use his technical training at UCLA to design and analyze the next generation of launch vehicles and spacecraft as he did at his previous employers including SpaceX, Virgin Galactic, United Launch Alliance and The Aerospace Corporation.