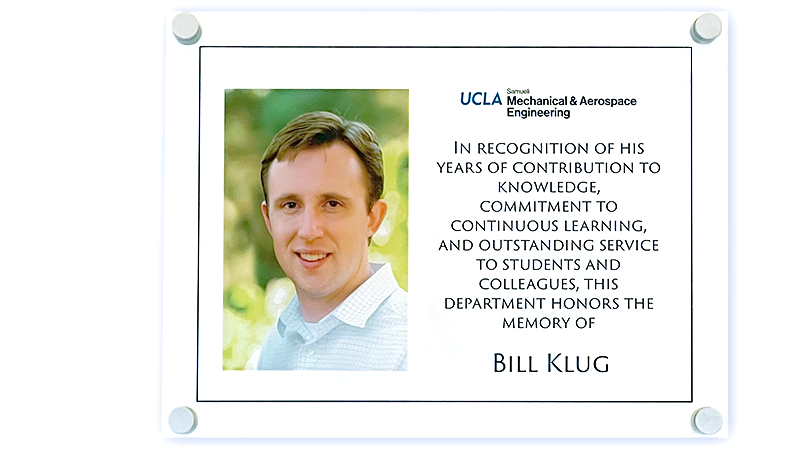 More than six years after the death of former mechanical and aerospace engineering professor William Klug, the UCLA Samueli School of Engineering has completed the renovation of 8500 Boelter Hall and renamed it the William S. Klug Memorial Seminar Room in honor of his lifelong dedication to teaching and his passion for seminars.

At a private ceremony on Oct. 28, Klug’s family and friends, former colleagues and students, as well as campus leadership came together to pay tribute to Klug who was killed in his office by a former student on June 1, 2016. He was 39.

“Professor Klug was a brilliant and respected scholar whose computational and biomechanics work changed lives,” said UCLA Chancellor Gene Block in his remarks at the event. “He was a researcher who reached across disciplines – a creative and excellent teacher, a kind and caring mentor to his students, as well as a wonderful example of what we try to cultivate in all our faculty.”

Known to all as “Bill,” Klug and his wife, Mary Elise, had known each other since college. She recounted the many occasions when Klug would delight in the opportunity to attend a seminar. “Bill loved seminars,” she said. “It was about learning, discovering, discussing. It was less about the answers, and more about the questions and the ideas, and the reasoning and finding out what everyone else was thinking about those questions.”

After painstakingly searching for an ideal location worthy of Klug’s memories for years, Klug’s home department of mechanical and aerospace engineering decided that the Boelter Hall room would be the right choice. A few of his former colleagues proceeded to draw up a plan for renovation and raised funds from 30 donors to begin construction in January. The room was finished just before the start of the fall quarter — complete with an audio and video equipment upgrade courtesy of the UCLA Master of Science in Engineering Online Program.

As a graduate student pursuing a master’s degree and later on as a faculty member at UCLA, Klug had visited the eighth-floor classroom numerous times, attending seminars and engaging in discussions on a wide range of topics. For Mary Elise and their two teenage children, there is no better location on campus than this space to honor Klug’s legacy.

For generations of UCLA students to come, this room will be remembered as the “Klug Penthouse” instead of its former “Boelter Hall Penthouse,” Mary Elise said. “I hope that every person who comes through this space will interact with people and ideas in some measure in the way that Bill would — with an open mind and an open heart.”

She pointed out that in the syllabi for his classes, Klug always included this reminder, which was printed in the event program: “University education is about so much more than gaining knowledge and a good GPA. Most importantly, it is about challenging and developing your mind and your character.”

“I hope that every person who comes through this space will interact with people and ideas in some measure in the way that Bill would — with an open mind and an open heart,” Mary Elise Klug said.

Professor Jeff Eldredge, a friend of Klug’s since their overlapping years as graduate students at Caltech, emceed the event and acknowledged the support of UCLA leadership, facilities management, sponsors and staff for making the dedication of the room a reality. He also mentioned several of Klug’s cross-disciplinary projects including mechanics of viruses and the heart, liver biomechanics and bacterial mechanics, noting that many of Klug’s former collaborators from across campus were in attendance.

“The work that Bill worked on and the papers he published are cited constantly, and that’s one of the legacies that he has,” Eldredge said. He shared that a special issue on biological systems was published in honor of Klug by the journal Computer Methods in Applied Mechanics and Engineering.

In his remarks, UCLA Samueli Interim Dean Bruce Dunn said that in this quarter alone, there are four lectures and three discussion sessions scheduled to meet in the room weekly and that is not including student organizations meeting for their club activities.

“They will get a glimpse of the Bill Klug that so many of his friends, former students and colleagues knew,” Dunn said. “He was the epitome of a UCLA professor with true Bruin spirit.”

Another speaker, Tino Mingori, a professor emeritus of mechanical and aerospace engineering, said that while he and Klug did not cross paths much in their fields of study, they became close friends because of their shared love of the ocean, particularly through surfing.

At the conclusion of the event, Klug’s two children proudly unveiled the plaque dedicated to their father at the entrance of the seminar room, which reads in part: “in recognition of his years of contribution to knowledge, commitment to continuous learning and outstanding service to students and colleagues.” A black-and-white photograph of one of Klug’s favorite surfing spots off of the coast of Southern California hung next to the plaque.