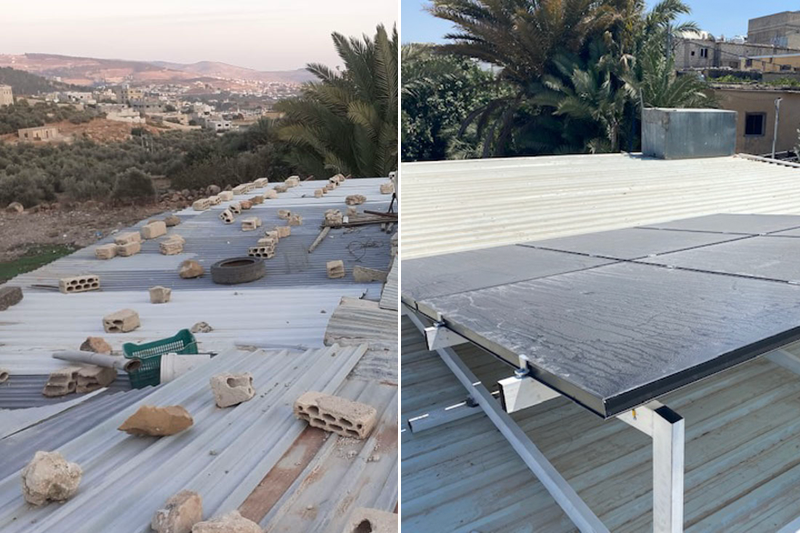 UCLA Samueli Newsroom
A group of UCLA students and recent graduates have brought safe and low-cost housing to refugees in Jordan by harnessing the power of the sun.

The student organization, Design Create Solar, brings together UCLA students from a wide range of academic backgrounds to design and develop solar-energy solutions for the campus and underserved communities around the world. Founded in 2019 by UCLA Samueli School of Engineering alumnus Rashed Alkhlaifat ’20, the club offers three programs with differing areas of focus — COLLABORATE, @UCLA and IMPACT.

The IMPACT program is currently working on a project to support the Jerash Refugee Camp, a housing site in Jordan for displaced Palestinian refugees that has been in operation since the 1960s. Over the past two years, Design Create Solar’s student leaders developed an energy and infrastructure solution designed to improve the quality of life at one of Jordan’s poorest refugee camps.

Alkhlaifat, who now acts as an advisor for the club, worked with the other founding members of the club — Amanda Lai ’20, George Shenusay ’21, undergraduate students Jacob Greenwood, Jeremiah Vela Murphy, Vaibhav Gupta and Ishnoor Singh — as well as Lindsey Parungo, the 2021-2022 president of the club, to bring the IMPACT project to life. There is also support from organizations and businesses, including The Green Initiative Fund, Pivot Jordan and SunPower Corporation.

Originally from Jordan, Alkhlaifat was motivated to create solutions for Jerash and other struggling communities in his hometown after seeing the challenges they face.

“What inspired me to take on this project is the fact that an overwhelming portion of the world’s population is unable to satisfy basic human needs such as food, water, energy and shelter,” Alkhlaifat said. “Growing up in the Middle East, I witnessed this firsthand as a lot of people in my community only had access to water on certain days of the week and would go months on end without electricity.”

Alkhlaifat has visited the camp frequently since 2019 to gain a better understanding of the struggles faced by its inhabitants. He found outdated homes built with carcinogenic materials and poor structural rigidity, which put the buildings at a high risk of collapse. According to Alkhlaifat, a vast majority of the refugees also face threats of eviction or jail time because they cannot afford to pay their electricity or other utility bills.

While studying materials engineering as an undergraduate, Alkhlaifat focused on developing and applying green technology to address climate change, one of humanity’s most immediate threats. In the process, Alkhlaifat discovered a way to improve building sustainability by outfitting a structurally rigid, retrofitted home with a solar roof that not only will provide thermal insulation and structural safety, but also a reduced carbon footprint.

With the help of assistant professor Aaswath Raman of materials science and engineering at UCLA Samueli, Design Create Solar successfully completed its first IMPACT project last month. The painstaking work involved building the roof insulation structure and the photovoltaic (PV) system. The club has installed six PV panels, some of the highest performing in the world, which were donated by the project sponsor, SunPower.

The PV panels are expected to provide two kilowatt-hours per day, which more than covers basic power consumption for a home, including refrigeration, laundry machines and water heaters. More notably, these solar panels will eliminate residents’ electricity bills, which usually account for 15% to 20% of household income.

Because of travel restrictions in the initial months of the COVID-19 pandemic, club members could not travel and help with construction. Work on the camp was suspended following a lockdown of all businesses in Jordan. Sponsor, vendor and partner support became increasingly challenging as their own businesses faced pandemic-related financial strain. Despite all these challenges, the club members were determined to make progress remotely, building the next year’s team and creating a robust plan for the future of the IMPACT program, which raised additional funding support.

Parungo said the club was able to secure $20,000 in funding from the UCLA Green Initiative Fund and is now working on a sponsorship packet to scale the project. Alkhlaifat says the club’s next goal is to further the research on the efficacy of the solar roofs by expanding the number of builds and collecting more data. Ultimately, the team seeks to understand how these roofs can improve the camp’s standards of living.

As the University of California prepares to offer mostly in-person instruction this fall, Design Create Solar’s immediate past president Shenusay, who graduated in June with a bachelor’s degree in environmental science and engineering, said the club has big plans both in Jordan and on campus. The group is looking to create large-scale change at UCLA by normalizing solar utility for its day-to-day operations in various facilities through COLLABORATE AND @UCLA.

While Design Create Solar’s focus is on finding green-energy solutions through engineering, students from all majors are welcome to join and bring their unique skillsets to the table.

“I joined the club because I’ve always been interested in sustainability and green energy,” said Parungo, a third-year financial and actuarial mathematics student. “I was also interested in the cross-disciplinary nature of the club. Even though I am not an engineer, I still feel as though I can contribute to the club and its mission.”