Knowledge of how liquid foams dissipate could lead to improved products 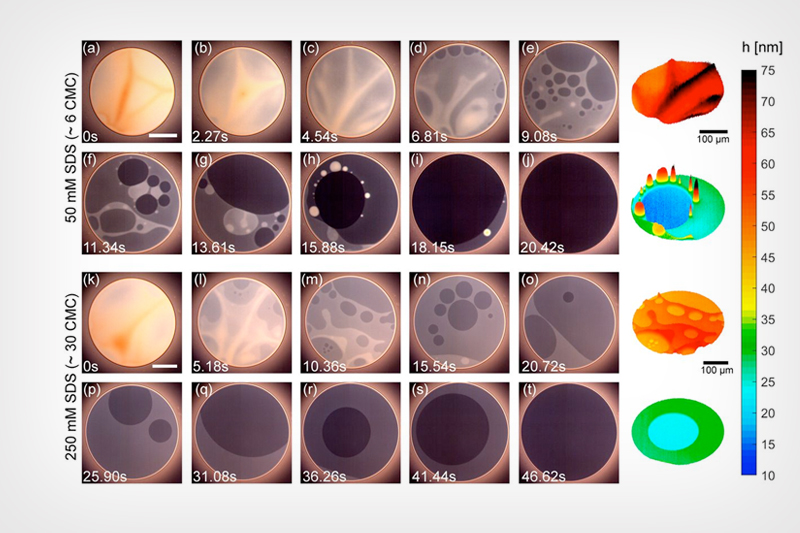 Chemical engineers at the University of Illinois Chicago and UCLA have answered longstanding questions about the underlying processes that determine the life cycle of liquid foams. The breakthrough could help improve the commercial production and application of foams in a broad range of industries.

Findings of the research were featured this month in Proceedings of the National Academy of Sciences.

Foams are a familiar phenomenon in everyday lives — mixing soaps and detergents into water when doing dishes, blowing bubbles out of soapy water toys, sipping the foam off a cup of lattes or milk shake. Liquid foams can occur in a variety of natural and artificial settings. While some foams are produced naturally, as in bodies of water creating large ocean blooms on the beaches, others arise in industrial processes. In oil recovery and fermentation, for example, foams are a byproduct.

Whenever soapy water is agitated, foams are formed. They are mostly gas pockets separated by thin liquid films that often contain tiny molecular aggregates called micelles. Oily dirt, for example, is washed away by hiding in the water-phobic cores of micelles. In addition, fat digestion in our bodies relies on the role of micelles formed by bile salts.

Over time, foams dissipate as liquid within the thin films is squeezed out. Soap and detergent molecules that are by very nature amphiphilic (hydrophilic and hydrophobic) aggregate within water to form spherical micelles, with their outward-facing heads being hydrophilic and water-phobic tails forming the core.

Drainage via stratification of micellar foam film, visualized in reflected light microscopy. Each shade of gray corresponds to a different thickness.

Micelles are tiny, but influential, not just in cleaning and solubilizing oil-loving molecules but also in affecting flows within foam films,” said co-principal investigator Vivek Sharma, an associate professor of chemical engineering at the UIC College of Engineering. For nearly a decade, he has pursued the question of how and why the presence of micelles leads to stepwise thinning, or stratification, within ultrathin foam films and soap bubbles.

To solve the puzzle, Sharma and his collaborators developed advanced imaging methods they call IDIOM (interferometry digital imaging optical microscopy) protocols that are implemented with high speed and digital single-lens reflex (DLSR) cameras. They found that foam films have a rich, ever-changing topography, and the thickness differences between different strata are much greater than the size of micelles.

“We used a precision technique called small-angle X-ray scattering to resolve the micelles’ shape, sizes, and densities,” said co-principal investigator Samanvaya Srivastava, an assistant professor of chemical and biomolecular engineering at the UCLA Samueli School of Engineering. “We found that the foam film thickness decreases in discrete jumps, with each jump corresponding to the exact distance between the micelles in the liquid film.”

The team also discovered that the arrangement of micelles in foam films is governed primarily by the ionic interactions between micelles. The electrostatic attraction and repulsion between ions influences how long foams remain stable and how their structure decays. With these findings, the researchers determined that by simply measuring the foam film thickness, which can be accomplished with a DSLR camera using the IDIOM protocols, they could characterize both the nanoscale interactions of micelles in liquids and the stability of the foams.

Compared to previous techniques that are more time-consuming and require expensive, customized equipment, the new method is not only less expensive but is also more comprehensive and efficient.

“The knowledge and understanding could aid in the development of new products — from food and personal care to pharmaceuticals,” said the study’s co-lead authors, graduate students Shang Gao of UCLA Samueli and Chrystian Ochoa of UIC. “It could also help engineers improve the control of foams in industrial processes.”

The research was supported by the National Science Foundation and by the Department of Energy, utilizing the Advanced Photon Source facility at Argonne National Laboratory in Illinois.