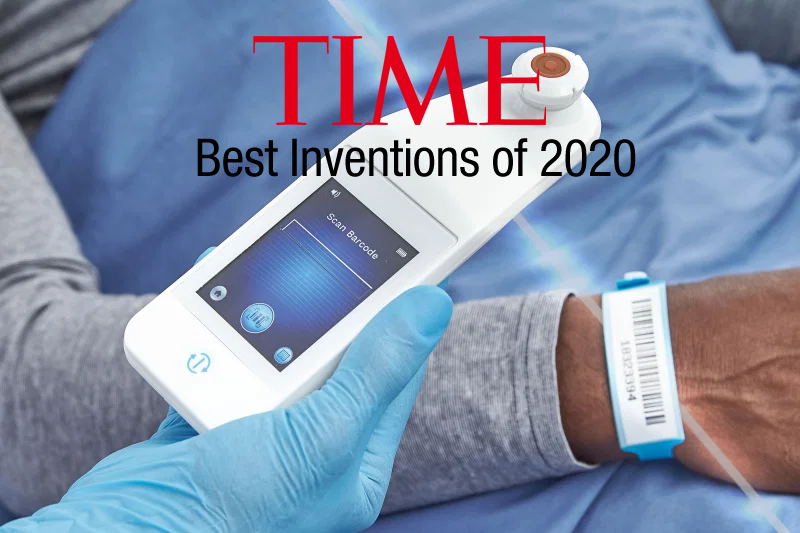 An advanced wireless scanner developed at UCLA that can help detect bedsores in advance has been named one of Time Magazine’s Best Inventions of 2020.

The Provizio SEM Scanner is a subepidermal moisture scanner developed by a team of scientists and doctors at UCLA and licensed by UCLA startup Bruin Biometrics. The U.S. Food and Drug Administration approved the device in 2019. The wound-assessment scanner is first of its kind and analyzes moisture levels under the skin in order to detect bedsores before they start. Higher moisture levels indicate that bedsores, also known as pressure ulcers, are forming under the skin. These types of tissue injuries occur when pressure is placed on parts of body for an extended period, such as lying in a hospital bed. The elderly and those with limited mobility are particularly vulnerable. Health care workers hold the scanner to a patient’s skin and wait for feedback about the moisture levels below the skins’ surface. The data allow nurses to detect signs of the bedsores formation up to five days earlier than they could with visual inspection, allowing crucial time needed to stop the sores from advancing.

Pressure ulcers cost more than $10 billion to treat in U.S. hospitals and cause infections that lead to the deaths of more than 60,000 people annually. The 30 U.S. hospitals that use the device have reported treating 90% fewer bedsores than before they adopted the device, which is now also used by many hospitals in Europe.

“It has been extremely rewarding for all of us to work on something that was once just a concept and turned it into an effective, yet simple-to-use product that has been helping medical personnel improve care and even save lives,” said one of the scanner’s inventors Majid Sarrafzadeh, co-founder of Bruin Biometric and a distinguished professor of computer science and electrical engineering at the UCLA Samueli School of Engineering. “This is also a real testament to the collaborative atmosphere at UCLA — engineers and scientists work hand in hand with doctors and nurses to solve tough problems that we face.”

The device was first developed more than 10 years ago by Sarrafzadeh; William Kaiser, a professor of electrical and computer engineering and director of the Wireless Health Institute at UCLA; Dr. Barbara Bates-Jensen, a professor at the UCLA School of Nursing and the UCLA School of Medicine and a world-renowned expert on treating wounds; and others at UCLA.