The Future is Flexible (and Squishy)

The Future is Flexible (and Squishy)

Researchers from UCLA Samueli School of Engineering are developing soft, bendable, responsive materials to use in the next generation of robots and electronic devices.

Today, most of the devices we use are, literally, stiff. Your e-reader likely can’t fold in half to slip into a pocket. Rock solid airplane wings don’t morph in shape mid-flight to adjust to gusts of wind. Your cell phone screen isn’t self-healing. And robots don’t give soft gentle hugs. If an object bends, that’s most likely because it has a physical joint (although several companies have bendable phones in the works). If an object changes shape, a large amount of mechanical force has been applied to make it do so. And when it physically breaks—well, you likely need a new one.

In the future, all these assumptions might go out the window. Materials scientists and mechanical engineers at UCLA are designing novel types of materials and devices that can bend and flex and interact with the world in entirely new ways. For now, most of their work is in the early stages; prototypes and models and materials that only exist in tiny quantities. But these researchers have grand visions, and what they see is a future composed of devices and robots that adapt to their surroundings with more unprecedented capabilities.

A new era of materials

First came the Stone Age, then the Bronze Age and the Iron Age. Some call the times we live in today the Silicon Age.  “Through human history, technology has been driven by the materials we have available. But now, if we’re going to do neat things, we need to architect completely new materials,” said Jonathan Hopkins, a UCLA assistant professor of mechanical and aerospace engineering. “I think the next thousand years will be the Age of Architected Materials.”

There are certain properties inherent to most materials that humans build things with—materials that are rigid can’t deform without a large amount of force, for instance. But Hopkins and others in his field are challenging some of these basic rules by designing, or “architecting,” materials that have new unusual properties.

While they look ordinary to the naked eye, the materials that Hopkins invents are composed of tiny geometric elements at a microscopic scale; beams and notches and hinges arranged into lattices. In a recent Nature Communications paper, Hopkins reported that his group had used such elements to design a material that could drastically change shape without much force applied, but remain stiff at the same time.

“This isn’t a device with lots of pieces rubbing against each other creating friction,” he said. “These architected materials are single monolithic pieces that morph into new things and can snap back to where they started.”

Hopkins envisions such a material— if it can ever be produced on a mass scale— creating new kinds of super-responsive airplane wings, body armor, prosthetic joints, or even entire robots.  Propellers could morph in shape as they spin faster to be more aerodynamically efficient, for instance.

To move toward those goals, Hopkins’ lab group is working on outlining entirely new design approaches to arrange the billions of elements that must be assembled to create a material that has different properties in different areas, or along different axes.

Stretched to the limit

Qibing Pei, UCLA professor of materials science and engineering, wants to develop stretchable materials that can make today’s devices more flexible—screens that fold up, polymers that don’t irreversibly break, and discrete wearable electronics that conform and bend along with the body.

Today, some screens and devices can fold, but the technology is in its infancy; cheap consumer electronics can only fold if they have a large hinge. In the future, mainstream screens or sensors might literally be foldable at any point, like a piece of paper. For electronics to fully bend, scientists need stretchable conductors, semiconductors, and dielectrics. Already, Pei has developed a rubbery polymer that’s conductive, with silver nanowires running in a mesh network throughout it. The mesh network can detect the touch of a finger and how much pressure it presses.

Pei’s team has applied their polymer to a prototype of a thin, flexible cooling device that can keep electronics from overheating. Next, they’ve set their sights on a flexible, stretchable image display— that means designing bendable transistor arrays and pixels. 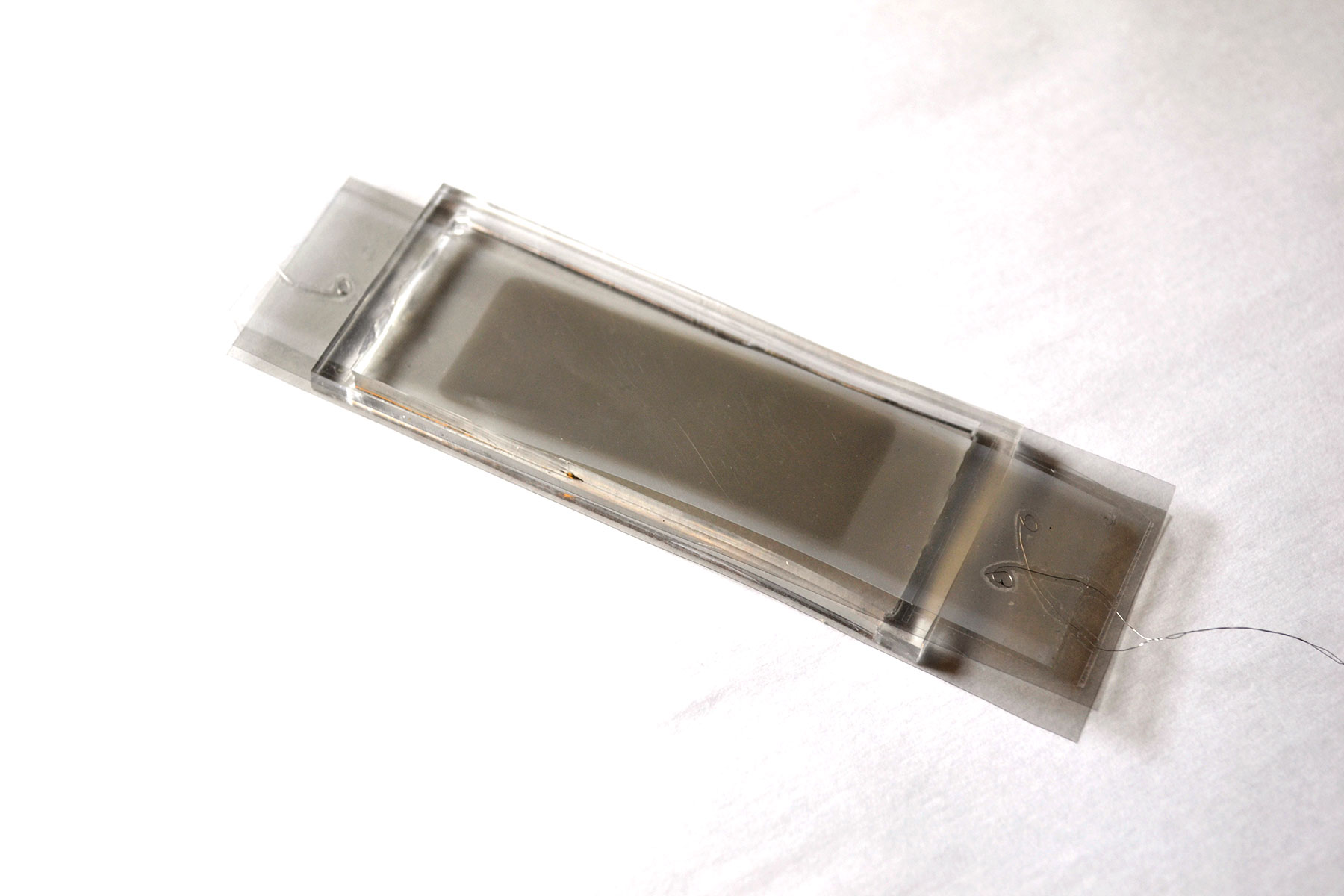 “There are all these materials starting to exist in research labs,” Pei said. “The challenge is to further improve them to the point where engineers can buy them and make functional devices.”

For the squishiest of applications in the future— robotic hands that feel human, or devices that can mesh with brain or heart tissue, for example—researchers are turning to hydrogels. Already present in our daily lives (gelatin, tofu, the inside of disposable diapers, and contact lenses are all hydrogels), these materials have cross-linked molecules dissolved in a high concentration of water.

“These are really useful because they sustain soft force but also have liquid properties,” said Lihua Jin, an assistant professor of mechanical and aerospace engineering.

At UCLA, Jin and Ximin He, an assistant professor of materials science and engineering, both focus their research on developing new hydrogels with more utility than something like Jell-O. Within the polymers that make up hydrogels, He has engineered binding sites in the gel network— when a protein molecule come in contact with the gel, the binding site binds the protein and makes the gel expand. Similarly, He’s group has a variation of the hydrogel that shrinks when copper ions are detected. In both cases, the gels can be used as sensors for an external molecule.

“Our hydrogel changes volume in response to a very tiny amount of copper ions and proteins,” He said. “It’s actually among the most sensitive bio/chemical sensor up to date.”

He’s lab is also designing a photo-responsive hydrogel that acts like an artificial sunflower; with no human intervention or programming needed, the phototropic gel can orient itself toward the light— something that solar energy companies have been striving to do.

“In the future, you might be able to coat a solar panel with tiny hairs that can all automatically face the light at all times, even on something like the roof of a moving car,” said He.

Jin’s work on hydrogels includes modeling their responsiveness, and developing much tougher ones based on understanding the mechanics of how they fracture.

The flexible devices that today’s engineers are striving for may sound far off, but there are already objects and materials in nature from which they can draw inspiration— from sunflowers that turn toward the sun to butterfly wings that stiffen based on airflow.

UCLA assistant professor of mechanical and aerospace engineering Khalid Jawed has taken his inspiration from the bacterial world. He’s working on a soft robot designed to look like a bacteria, with a single corkscrew tail that rotates to propel the robot forward. Unlike other tiny, mobile robots, Jawed’s bot doesn’t have joints and doesn’t require complicated inputs to steer it. Instead, researchers control only its speed, and its tail steers the bot based on speed. At low speeds, the robot moves in a straight line, while higher speeds induce bucking in the flexible tail and make the robot change direction.

“What this does is drastically reduce the number of components you need in a system,” Jawed said. His bendy bacteria-bot may someday be able to steer through the human body to deliver drugs or through small pipes to clear clogs, he says.

Many researchers who work on these futuristic materials have the same ultimate goal: a soft, more humanoid robot than ever before. Jawed, for instance, has an ongoing lab project to use physics to better train robots to fold clothes or handle other soft materials like ropes— something that comes easy to most humans but still robots stumble with. Other researchers mention robots that can better sort eggs or berries in an assembly line without making messes when they grab too hard.

“Gradually, these devices that we can only dream of today will migrate into our daily lives and change the way we do things,” said Jin.

She imagines something like the robot in the movie Big Hero 6— a squishy, huggable bot—as an ultimate goal. “A robot like this can more safely interact with humans,” Jin said.