Bioengineering doctoral student Joseph de Rutte overcame the odds to win this year’s $10,000 Society for Laboratory Automation and Screening Innovation Award, becoming only the second student to ever win the prize in its 16-year history.

The only student finalist, de Rutte won the award in January for his innovative approach to sorting cells that uses equipment readily available at most labs. He uses microparticles, only 50 to 80 thousandths of a millimeter in diameter, to isolate cells from one another — a technique known as lab-on-a-particle. Those isolated cells can then be tagged with fluorescent markers and sorted based on the presence of certain antibodies or proteins sought by researchers for different types of disease therapies. 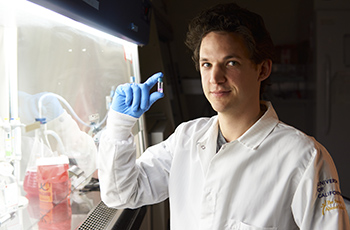 “What is unique about this new lab-on-a-particle approach is how accessible it promises to be, democratizing the most sensitive assays in the world,” Di Carlo said. “We are working with single cells and molecules that are 10- to 10,000-times smaller than a piece of human hair. This is where our lab-on-a-particle and other microfluidic technologies play a leading role.”

De Rutte performed his research under the supervision of Di Carlo, who encouraged de Rutte to explore new methodologies and recognize unexpected potential in experiments. De Rutte said this new method dramatically expands access to cell-sorting techniques, which currently can only be performed by bulky and expensive machines that are typically only available to large pharmaceutical companies.

“If you limit a technology to only a small subset of people, the amount of things that will be discovered is significantly less than if all of a sudden everyone has access to it,” he said. “And so, it’s this idea of: Can we democratize this tech and make it easier for others to start playing around and discover new things or even develop new treatments for cancer and other diseases?”

De Rutte will receive the prize after submitting a manuscript to be published in one of SLAS’s scientific journals. After completing his Ph.D. this summer, de Rutte is interested in continuing research and commercializing his approach to cell-sorting.

The SLAS International Conference and Exhibition is an annual event held by the Society for Laboratory Automation and Screening, an international community of 16,000 students and professionals working to promote technology and processes that help the life sciences. Founded in 2009, the SLAS Innovation Award is the most prestigious award of the conferences. It is given each year to recognize a single podium presentation that presents a new technology that will improve life scientists’ ability to do research.