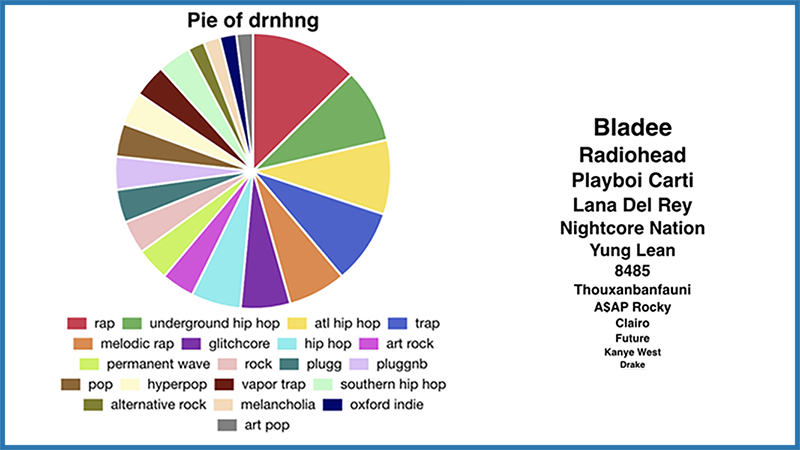 In the final week of the spring quarter, many UCLA students were stressed, exhausted and highly caffeinated as they prepared for their final exams. However, second-year computer science student Darren Huang found himself bored and restless. His solution? Creating an app that he never thought would soon take social media by storm.

In just five hours over the span of two days in early June, Huang developed Spotify Pie — a “Bake Your Monthly Genre Pie” web-based app that shows users their favorite music genres and artists in a colorful pie chart. To get one’s Spotify Pie, a user will access the third-party app by clicking on Huang’s website via a smartphone or computer. After signing into one’s Spotify account and enabling the app’s access to the listening history, a personalized Spotify Pie chart will be generated and a screenshot can be shared with friends or posted on social media.

The chart displays a listener’s musical genre preferences from Spotify over the past month, which can be as specific as “modern dream pop” or “bubblegrunge” and shows relevant artists known for their work in the respective genre. Users can also see their most-listened-to artists, indicated by a larger font size.

The idea, inspired by Spotify’s end-of-year “Spotify Wrapped” feature that shows users a comprehensive summary of all their music listening habits from the past year, sprang from a conversation Huang had with a friend a month ago. The two discussed that they would like to see a simple, graphical display of their music listening habits at any time of the year, not just at the year’s end.

“At first, it was a monetary success, just from the ads and sponsors … I was really surprised,” Darren Huang said.

Huang shared the website with a few friends once he finished building it, but he didn’t expect the personal project to become an international phenomenon.

“I was using a [programming] language that I didn’t know too well,” Huang said. “I was sort of doing the project as a way to learn it and get more familiar with it.”

The morning after Huang published the website, he woke up to dozens of messages and social media tags about Spotify Pie. The website was soon featured in USA Today, Yahoo! and even news publications in Europe and Australia, opening up lots of new opportunities for Huang.

“At first, it was a monetary success, just from the ads and sponsors … I was really surprised,” Huang said. “And then some other companies actually started to reach out to me [regarding internships].”

Huang decided to work with one such company, the New York-based startup Koodos for the summer, where he is building off his Spotify Pie work to design an app that creates a graphic for users’ unique music tastes.

“I’m really interested in what I’m building for Koodos,” Huang said. “The way I see it, it’s sort of like immortalizing that concept [of Spotify Pie], because then it’s not just a random website.”

Koodos’ founder, Jad Esber, could relate to Huang’s experience. According to Huang, Esber programmed a popular app that sent an emoji designed to match a user-selected song via text messaging, which became an instant hit on social media. That similar experience reaffirmed Huang’s decision to work with Koodos.

“I felt like he was like a big version of me, so that’s why I ultimately joined [his company] as an intern,” Huang said.

Spotify Pie isn’t the first creation resulted from Huang being productive in his downtime. During the pandemic, Huang — who also works as a fashion model while pursuing his degree — took up sewing as a hobby.

“[It was] nothing too serious, but that did get me started in standing at the intersection of engineering and art,” Huang said.

While Huang always knew he wanted to study computer science, he initially thought he wanted to combine that interest with biology, a subject he enjoyed in high school. He even started as a psychobiology major at UCLA, but felt like he was missing the creative aspect he craved.

After going through the process of switching his major to computer science, Huang said he felt free to pursue more of his own creative interests, designing gaming chat bots and developing apps like Spotify Pie.

“I’m slowly making an area that I could call home, which is basically just being able to justify and combine these interests into one,” he said.

Spotify Pie is just the beginning for Huang. He said he hopes to delve further into app development as he continues to find innovative ways to apply his computer science knowledge to creative endeavors. As Huang embarks on his next journey, one may catch him rocking out to Swedish rapper Bladee, Radiohead, or American rapper Playboi Carti — his top three artists, according to his own Spotify Pie chart.