Robots for the Masses: 3Qs with Ankur Mehta

Last year Ankur Mehta, an assistant professor of electrical engineering, received a grant from the National Science Foundation for “A Computational Approach to Customizing Design” – essentially, building a complete resource for people without the technical know-how of robotics experts  to build their own robots. Recently, he’s also delved into how autonomous cars could help improve traffic. As he heads into his third year on the UCLA Engineering faculty, Mehta answered three questions on the direction of his research.
“There’s a robot for that”

1. The goal of your UCLA lab, LEMUR (Laboratory for Embedded Machines and Ubiquitous Robots), is “enable a future filled with robots.” What do you mean by that, specifically say for an  average person who is not a roboticist?

We currently live in a world filled with computers — with laptops, smart phones, smart watches, and more, it is increasingly easier to find solutions to any computational problem we may have.  But when it comes to physical problems in the real world, we are lagging far behind: how often have you used a robot in the past hour / day / week? My research aims to find out why we currently have such limited everyday automation and create the technology necessary to make robotics as ubiquitous as computing is today.  My goal is that eventually everyone will be able to say, for any physical task that needs solved, “there’s a robot for that.” 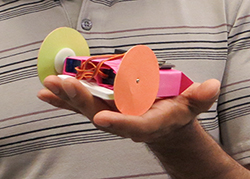 2. One of your areas is “printable robotics.” What does that offer for that average person? And what can they do with these very simple, familiar and inexpensive materials?

One of the factors significantly limiting the proliferation of personal robots is the difficulty in designing and manufacturing electromechanical machines.  So when I say “printable”, I mean that in the sense of being able to create such devices on demand, enabling custom robots to be built by an end user — in particular an average person who may not be a roboticist — with a specific problem.  In part, this means fabricating such devices out of household materials such as paper and thread and controlling it autonomously or by a smartphone.  My research aims to figure out how to work within those constraints to create robots capable of arbitrary functionality.

3. Your work on semi-autonomous driving was also recently highlighted in UCLA Magazine. How  does that relate to your lab goals and what is the outcome you’re thinking about in this particular area?

Here as well, my goal is to get robots into everyday life to solve real world problems.  Furthermore, I’m interested in the interplay between people and robots and the idea of keeping humans “in the loop”, both in the creation of robots as I mentioned before and during the operation of robots as in the case of semi- autonomous driving.  Self-driving cars are specific robots that have great potential to benefit very many people, but the technology and policy necessary for complete adoption of fully autonomous vehicles is still decades away.  In the meantime, I believe we can still improve quality of life despite limits on the level of autonomy and penetration rate.  My aim is to constructively prove that small numbers of simple autonomous vehicles can still be sufficient to reduce traffic delays, energy consumption, and pollution generated throughout a mostly human- driven transportation network.