QWER Hacks: A Case Study on How to Build an Inclusive Hackathon 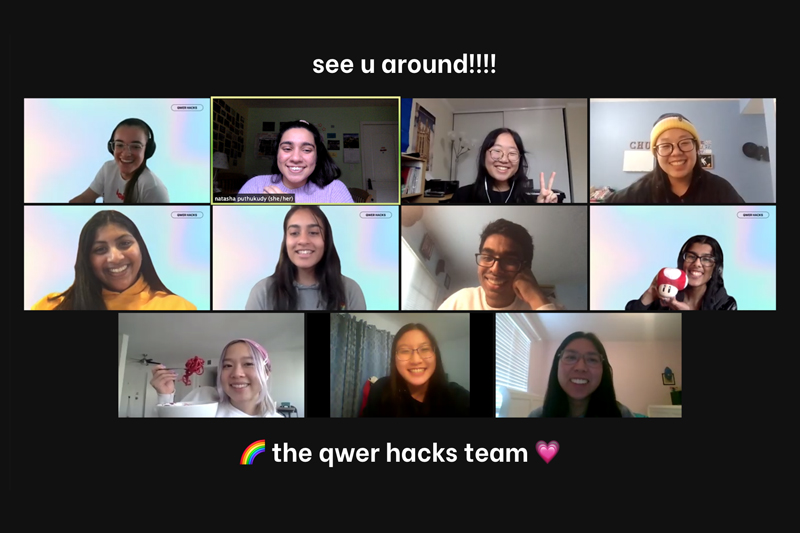 By UCLA Samueli Newsroom
On a Saturday morning in late January, more than 200 people from across the globe hopped online to participate in QWER Hacks, UCLA’s first-ever LGBTQIA+ hackathon.

The hackathon was organized by a team of UCLA students involved in various student organizations who were interested in amplifying LGBTQIA+ voices. The 24-hour event was attended by hackers who worked with mentors to pitch innovative project ideas spanning four subject tracks: health care, education, entertainment and public policy. Designed to bring together a community where inclusivity was celebrated, the forum addressed how to prevent bias and improve underrepresentation in STEM.

The 2021 QWER Hacks was the culmination of an eight-month-long planning process — from contacting guests and mentors to marketing the event. Participating organizations included the Association for Computing Machinery (ACM) at UCLA, Society of Women Engineers (SWE) at UCLA, Queers in Stem at UCLA, Bruin Entrepreneurs and UCLA AllBrains. Major League Hacking, an international hackathon league that organizes more than 200 annual weekend-long competitions, was one of the sponsors.

The hackathon was organized by a team of UCLA students involved in various student organizations who were interested in amplifying LGBTQIA+ voices.

“Our primary goal was to celebrate the LGBTQIA+ community in STEM by engaging and bringing together queer and trans individuals and allies through empowering tech talks, technical and community-building workshops, and the development of innovative products to help underrepresented groups,” said Rithika Srinivasan, a third-year computer science major at UCLA Samueli School of Engineering and technical director for QWER Hacks.

QWER Hacks was hosted on the Tikkl event platform on Jan. 23 and 24. Group formation and announcements were made primarily on the Discord chat app, while workshops were held via live Zoom sessions. With the help of live Zoom takeovers from industry sponsors Xilinx, Robinhood and AT&T, the event also was a makeshift career fair. Hackers attended sessions hosted by recruiters to better understand the hiring practices of leading organizations.

“My friend at UCLA told me about QWER Hacks,” said Kendall Ka, a senior at the University of Michigan studying film and communications who participated in the event. “We’re both interested in UI/UX and graphic/branding design. It’s definitely comforting to see students from so many places and disciplines!”

While hackers were free to get started on their own projects, there were plenty of live workshops available to provide resources. ACM Women, a subsection of ACM, focused on starting conversations about diversity in tech, hosted a workshop on how to utilize the coding software Git and how to successfully navigate the world of online hackathons. Toward the end of the workshop, participants had the option to join breakout rooms and identify potential teammates for their projects.

In addition to technical information on hacking, some workshops targeted career resources for the LGBTQIA+ community. Moss Moreland, a software engineer at Traveler’s Insurance, hosted a session on resume building and networking. Another session focused on how to navigate the workplace as a nonbinary employee.

Other workshops addressed the issues of systemic bias and underrepresentation in tech with the help of industry leaders, many of whom striving to change the culture of STEM and promote inclusivity in their respective communities. For example, Raksha Muthukumar, a software engineer at Google and prominent community organizer, hosted a meeting on building ethical technology.

“The part of QWER Hacks 2021 that struck me the most is the unexpected and wonderful passion individuals in this space had for topics that are often overlooked,” said Sharvani Jha, a fourth-year computer science student at UCLA, external vice president of SWE and Moonshots director for ACM.

One of the projects spotlighted at the hackathon was Queercare, a platform to build communities and access resources for LGBTQIA+ friendly health care providers. Users can rate the providers based on their quality of care and knowledge of LGBTQIA+ health issues.

“I went in with a goal to pitch my app idea for virtual supportive spaces for transgender/gender-nonconforming and queer folks to help us receive holistic support in these difficult spaces that often negate our identities,” said Kade Cahe, a software engineering teaching fellow at Fullstack Academy and hacker for Queercare.

First established in 2020, QWER Hacks is an annual event open to individuals 18 or older who are enrolled in a postsecondary academic institution.

“It was so empowering to hear hackers’ awareness of how AI systems can police Black and brown bodies and the negative impact of virtual education on health, mental health issues within the LGBTQIA+ community,” said Arjun Subramonian, a senior computer science student at UCLA and one of the founders of QWER Hacks. “I know the event will only continue to improve and build a strong, vibrant and open LGBTQIA+ community in tech.”

Other organizers reflected on how the event cultivated a vibrant community space for all identities and was accessible to a diverse group of people outside of UCLA and Southern California.

“My favorite part about QWER Hacks is being able to create a welcoming environment where everyone feels supported and empowered,” said Natasha Puthukudy, a fourth-year design/media arts major at UCLA and a QWER Hacks organizer. “I love going through form responses or our IG notifications or reading comments in the Discord where people talk about what this event means to them and how much fun they had. It really grounds the impact of QWER Hacks and makes me so happy to see.”

First established in 2020, QWER Hacks is an annual event open to individuals 18 or older who are enrolled in a postsecondary academic institution. More resources offered by QWER Hacks can be found on their website.