The UCLA Henry Samueli School of Engineering and Applied Science honored the accomplishments of leading students, teachers and alumni at the school’s annual Awards Dinner on Nov. 1.

UCLA Chancellor Gene Block, who attended the gala alongside faculty members, alumni, donors and friends of the school, lauded the engineering school’s effort to build Engineering VI, a 150,000 state-of-the-art facility now under construction across Westwood Plaza from the planned Meyer and Renee Luskin Conference and Guest Center.

The 2013 Engineering Awards winners are:

• Alumnus of the Year: David Mong ’84. Mong is the vice chairman of the Shun Hing Group in Hong Kong. The company, started by his father in 1953 as a distributor of Panasonic products, now employs some 1,800 people in fields including logistics, engineering, electronics and property management. In 2013 Mong and the Shun Hing Education and Charity Fund, which has helped build libraries and classroom buildings at college campuses in Hong Kong and China, donated $5 million to UCLA Engineering. The school will name a cutting-edge 250-seat learning facility in Engineering VI in honor of Mong’s father, Shun Hing founder Dr. William M.W. Wong.

Mong came from Hong Kong to attend the event, and said he was amazed to see the changes to campus in the 15 years since he last visited. In a video presentation, Mong said he made the gift in hopes that generations of engineers can have the excellent educational experience he had at UCLA. 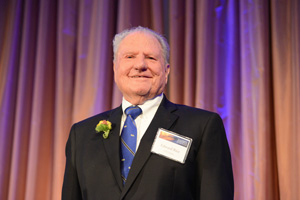 • Lifetime Contribution: Edward K. Rice. Rice is the founder of CTS Cement Manufacturing Co. and is a former UCLA Engineering professor who, along with his wife Linda, has contributed to UCLA Engineering in innumerable ways. Gifts from Edward and Linda Rice to the school include the creation of the Edward K. Rice Conference Room in Boelter Hall, as well as several scholarships, fellowships and awards.

Rice received a warm ovation as he received his award, and earlier in the evening presided over the presentation of the Edward K. Rice Outstanding Student awards to four worthy recipients.

• Alumni Professional Achievement: Charles Reames MS ’80 PhD ’85. Reames served as director of cable and satellite systems at semiconductor giant Broadcom Corp. from 1995 to 2011, growing the firm’s system engineering organization from its inception. Reames retired from Broadcom in 2011.He created the Charles Reames Chair in Electrical Engineering, which is held by another one of the evening’s awardees, Professor Alan N. Willson, Jr.

In his remarks, Reames recalled the inspiration his teachers offered and said the demands that UCLA Engineering students seek novel approaches to difficult questions has served him and others well.

“Innovation is a very hard thing to teach,” he said. “But somehow it does happen here.”

• Alumni Academic Professional Achievement: Yannis Phillis, MS ’78, PhD ’80. Phillis is a professor of systems engineering and director of the Computer Aided Manufacturing Lab at the Technical University of Crete, in Greece, where he has served two terms as rector. He is also an accomplished novelist and poet and is active in environmental issues. He was a visiting professor at UCLA from 2005 to 2007. Dhir said Phillis is “a renaissance man in every sense of the phrase.”

• Lockheed Martin Excellence in Teaching: Alan N. Willson Jr. The Charles Reames Chair in Electrical Engineering, Willson joined UCLA in 1973. He founded the UCLA chapter of the national EE honorary society Eta Kappa Nu, served for 15 years as associate dean, and along with his students published hundreds of journal and conference papers. He retired in 2013.

Dhir described Willson as “the perfect teacher. Many of us tried to emulate him.”

• Northrop Grumman Excellence in Teaching: Lara Dolecek. Dolecek is an assistant professor in the Electrical Engineering Department whose research interests include data storage, information theory, statistical algorithms and computational methods. Her honors include a National Science Foundation CAREER Award. She joined the UCLA Engineering faculty in 2010.

• Northrop Grumman Excellence in Teaching: Shaily Mahendra. Mahendra is an assistant professor in the Civil and Environmental Engineering Department whose research interests include environmental microbiology and environmental impacts of nanomaterials and bioremediation. Her honors include a National Science Foundation CAREER Award. She joined the UCLA Engineering faculty in 2009.

• Edward K. Rice Outstanding Master’s Student: Frederic Sala MS ’13. A recipient of the National Science Foundation’s Graduate Research Fellowship, Sala is a Ph.D. student in Electrical Engineering whose research is in the area of information theory and data storage. He works in Professor Dolecek’s Laboratory for Robust Information Systems.

• Young Alumni Service: Aditi Gobburu ’07, MS ’08. An active member of the UCLA and Los Angeles chapters of the Society of Women Engineers as well as the UCLA Engineering Advisory Board, Gobburu is a structural analysis engineer at the Northrop Grumman Corp.

The UCLA Henry Samueli School of Engineering and Applied Science, established in 1945, offers 28 academic and professional degree programs and has an enrollment of more than 5,000 students. The school’s distinguished faculty are leading research to address many of the critical challenges of the 21st century, including renewable energy, clean water, health care, wireless sensing and networking, and cybersecurity. Ranked among the top 10 engineering schools at public universities nationwide, the school is home to eight multimillion-dollar interdisciplinary research centers in wireless sensor systems, wireless health, nanoelectronics, nanomedicine, renewable energy, customized computing, the smart grid, and the Internet, all funded by federal and private agencies.