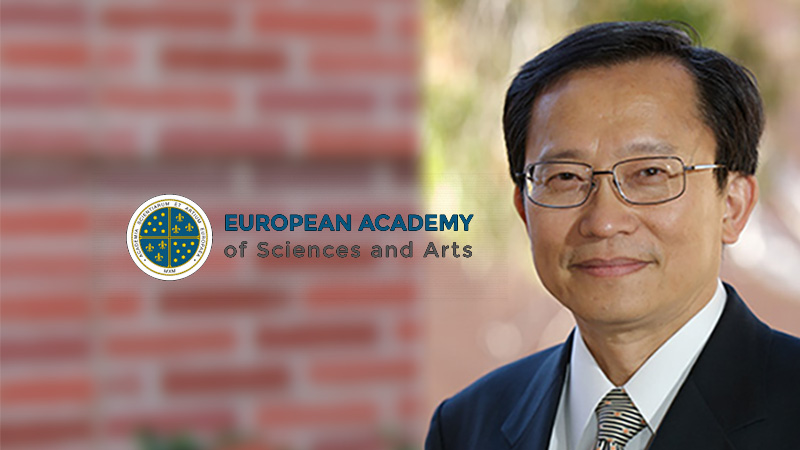 M.C. Frank Chang, who holds the Wintek Chair in Electrical Engineering at UCLA, has been selected as a 2022 member of the European Academy of Sciences and Arts (EASA) in the category of technical and environmental sciences.

The academy members are chosen for their outstanding achievements in arts, science and governance as well as for exceptional work in academia, notable publications and other areas.

Chang is a distinguished professor of electrical and computer engineering at the UCLA Samueli School of Engineering, where he directs the High Speed Electronics Laboratory. His research focuses on high-speed semiconductor devices and high-performance integrated circuits for mixed-signal microwave, millimeter-wave and sub-millimeter-wave (also known as terahertz) system-on-chip applications.

Among the many accolades Chang has received are his election to the National Academy of Engineering in 2008, Academia Sinica in 2012 and the National Academy of Inventors in 2015. Chang first joined UCLA in 1997 and served as chair of the Electrical and Computer Engineering Department from 2010 to 2015. He then became the president of the National Chiao Tung University in Taiwan from 2015 to 2019 before returning to UCLA. Chang has decades of industry experience, including being the assistant director and department manager of the High Speed Electronics Laboratory of the Rockwell International Science Center in Thousand Oaks, California.

Established in 1990 and headquartered in Salzburg, Austria, EASA boasts nearly 2,000 members and is a “non-governmental, European association committed to promoting scientific and societal progress.”

The 2022 members will be inaugurated at the association’s annual Festive Session on June 30-July 2 in Salzburg.