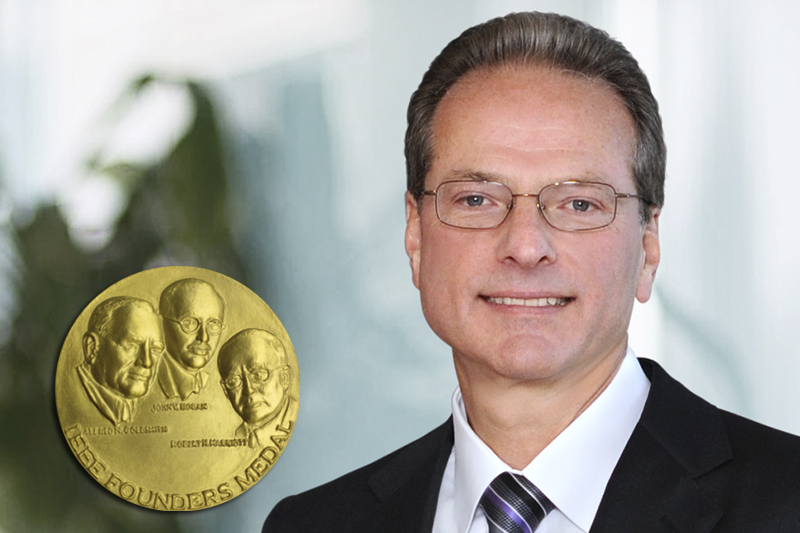 IEEE, the world’s largest technical professional organization for electrical and electronics engineers, has chosen Henry Samueli as the recipient of the 2021 IEEE Founders Medal. The namesake of UCLA Samueli School of Engineering and chair of the board of Broadcom Inc., Samueli is also a triple Bruin and an electrical and computer engineering professor at UCLA.

With nearly 420,000 members in more than 160 countries around the world, IEEE is known for its advocacy of technology advancement. In selecting Samueli for one of the organization’s highest honors, IEEE cited his “leadership in research, development, and commercialization of broadband communication and networking technology with global impact.”

Samueli earned his bachelor’s, master’s and doctoral degrees from the UCLA School of Engineering. In 1991, while still teaching at UCLA, he co-founded Broadcom Corporation with one of his Ph.D. students, Henry Nicholas. The company became a global leader in providing semiconductor technologies and infrastructure software for wired and wireless communications.

“This is a wonderful and well-deserved recognition for Henry Samueli who started his groundbreaking research on analog and mixed-signal circuits for communication systems at UCLA,” said Jayathi Murthy, the Ronald and Valerie Sugar Dean of UCLA Engineering. “We are so proud of his innovations, leadership and steadfast commitment to educating the next generation of engineers.”

In addition to his many professional achievements, Samueli is also a prominent philanthropist and owner of the National Hockey League’s Anaheim Ducks in Orange County, California. Both the engineering schools at UCLA and UC Irvine are named in Samueli’s honor, commemorating his landmark gifts in 1999. In 2019, Samueli and his wife Susan gave $100 million to UCLA through the Samueli Foundation as part of the university’s Centennial Campaign to support the growth of UCLA Engineering.

Samueli has received numerous international honors for his contributions to communications technology, including the Global Semiconductor Alliance Dr. Morris Chang Exemplary Leadership Award and the Marconi Society Prize and Fellowship. He is a member of the National Academy of Engineering, and a fellow of IEEE, the National Academy of Inventors and the American Academy of Arts and Sciences.