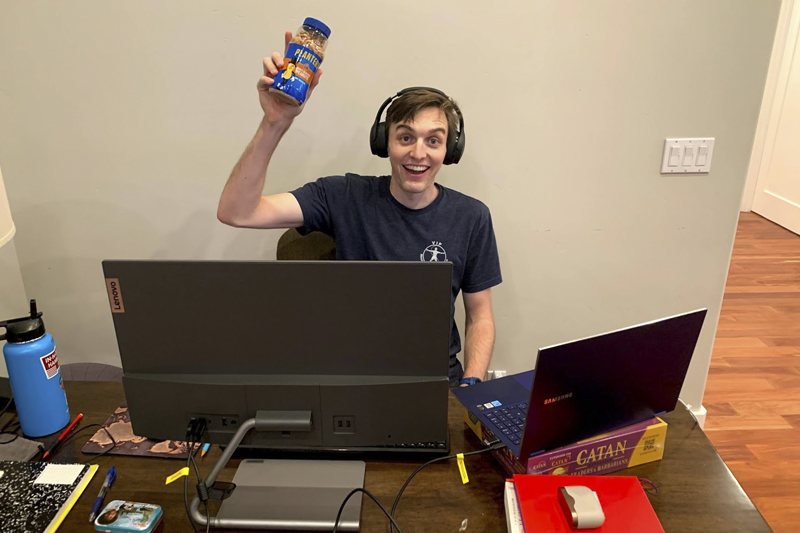 Photos courtesy of Mark Nasielski.
Mark Nasielski, held a jar of peanuts tightly in his hand for good luck as he watched the NASA Perseverance rover descend into Mar’s Jezero Crater.

Nasielski and about 30 members of the international Radar Imager for Mars’ Subsurface Experiment (RIMFAX) team shared the anticipation and excitement of the milestone, watching the live stream on a virtual conference call.

“Prior to landing day, I had watched the simulations of entry, descent and landing over and over because the maneuver that was planned was kind of unbelievable,” said Nasielski. “When ‘Percy’ (Perseverance) finally landed, I felt ecstatic — both because of the excitement surrounding the mission and because I knew I could keep my job!”

RIMFAX is a ground-penetrating radar on the Perseverance rover, with its antenna sitting on the bottom of the rover and sending radio waves into the ground to measure reflection from subsurface layers as the rover traverses Mars.

Nasielski joined RIMFAX this year through an invitation from UCLA department of earth, planetary and space sciences professor David Paige, who serves as RIMFAX deputy principal investigator. He had previously worked with Paige as a programmer analyst for the Diviner Lunar Radiometer Experiment, an instrument aboard NASA’s Lunar Reconnaissance Orbiter that created dynamic surface temperature maps of the moon’s surface.

For the RIMFAX team, the landing was the first step in initiating research on Mars’ subsurface environment. The team’s mission is to analyze objects or patterns that could have only originated from biological activity.

“The goal of RIMFAX is to use these radar profiles to understand stratigraphic relationships, properties of underground rock and underground deposits,” said Nasielski. “The data can be used to uncover the early history of Mars and help narrow down the search for potential biosignatures inside and near Jezero.”
The search for biosignatures on Mars involves finding rock deposits and other geological features that could help shed some light on signs of past life. If RIMFAX finds layers of rock sediment deposited by water in the Jezero delta in Mar’s northern hemisphere, it would suggest that Mars’ climate was previously warmer, wetter and therefore habitable.

RIMFAX began collecting data on March 6 and research is expected to last until 2024.

Nasielski works alongside a team of engineers and scientists from across the globe, including Norway, RIMFAX’s birthplace. His main responsibility involves helping the team analyze the data being transmitted from Mars.

“I find it amazing that Mars is populated entirely by robots that can act autonomously at a distance of millions of miles from Earth,” said Nasielski. “Perseverance is a great example of how electronics can extend our senses to a place where previous generations could only dream of visiting.”

Nasielski credits a childhood filled with memories of taking things apart and asking questions as a fundamental part of why he is involved in space exploration research.

“Both of my parents encouraged me to ask questions and find out how things worked, which is something that has stayed with me,” said Nasielski. “I also was really involved with Science Olympiad in high school, which allowed me to build cool things like catapults and study a large swath of scientific concepts, from circuits to geology.”

Nasielski’s interest in space exploration, scientific thinking and electronic design have guided his time at UCLA and his work at RIMFAX. He believes that space is the final frontier that can shine a light on Earth’s own role in the universe. Inspired by Carl Sagan’s “Pale Blue Dot, which underscores the importance of human responsibility to preserve their only home, Nasielski said such philosophy can help guide human ethics and enable a better and more reasonable society.

After getting his bachelor’s degree in electrical engineering last year, Nasielski continued his advanced study at UCLA Samueli and will attain his master’s in electrical engineering this June. He has been active in the student chapter of the Institute of Electrical and Electronics Engineers, the Eta Kappa Nu honor society and club volleyball. Post-graduation, he looks forward to continuing his work with RIMFAX.

“Getting involved with RIMFAX has continued to pique my interest in space exploration and technologies, and so I hope to continue working to advance the knowledge of Earth and our solar system,” said Nasielski. “I hope to be a lifelong student by continually learning and growing as an engineer, no matter where I end up.”