Finding Inspiration in the Night Sky with Alumna Keji Sojobi 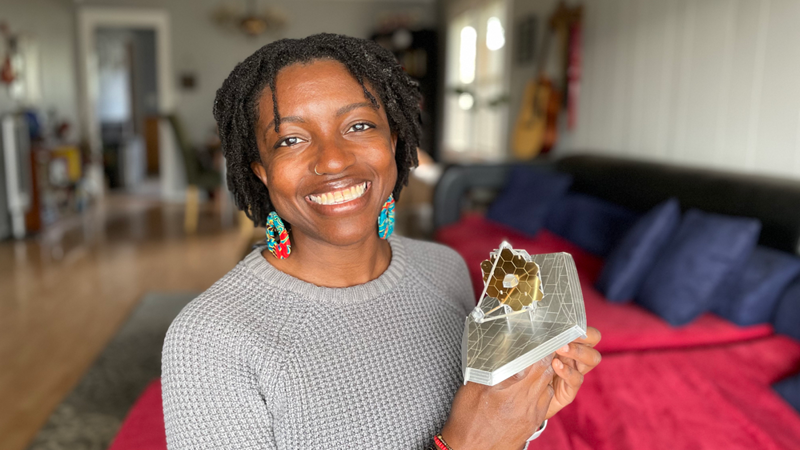 UCLA Samueli
When Keji Sojobi ’07 looked up in the night sky as a child, she found herself struck by the vastness and mystery that existed in the darkness.

“I think I found it sacred, even though I wouldn’t have known to use that word — that there is this mind-blowing amount of stuff we humans don’t know but over time continue to create ways to discover,” Sojobi said.

These days, Sojobi is no longer just wondering about the vast unknown in the outer space. She is actively exploring beyond the Earth’s atmosphere as a senior mechanical design engineer at defense and space manufacturing giant Northrop Grumman.

As she sat in bed at 4 a.m. on Christmas Day last year watching the James Webb Space Telescope’s launch through a livestream on her laptop, Sojobi couldn’t believe that she helped in getting the world’s most powerful telescope catapulted into space.

“It was a dream come true for someone who is passionate about space exploration,” Keji Sojobi said.

“It was a dream come true for someone who is passionate about space exploration,” Sojobi said. “To get to experience the details of what it takes to make something with such an awe-inspiring mission was huge for me.”

Sojobi worked on Webb’s mechanical design integration team from 2012 to 2015, helping build the spacecraft bus portion of the telescope. The bus holds the sources of propulsion, thermal management, power and other aspects that help keep the telescope alive in the cold of space, making its functionality integral to the telescope’s mission. Sojobi and colleagues on her team had to fix many problems — many of which were related to wiring and cabling.

Even after all these years, she still could remember those late nights trying to solve one mind-boggling problem after another with her teammates, making sure all the parts fit and worked together.

As she watched the final booster detach after the launch, and those watching on Earth got their last glimpse, Sojobi said she found herself unexpectedly overcome with emotion.

“I actually shed a tear,” she said. “Even though I hadn’t worked on Webb in years by that point, it still felt like bidding farewell to a loved one leaving for an indefinite journey.”

Now four months post-launch, the James Webb Space Telescope has reached its destination at one of the Lagrange points and, as of mid-April, all of its systems are operational.

But before playing a part in such a historic moment, Sojobi was an aerospace engineering undergraduate student at the UCLA Samueli School of Engineering.

“I was so excited to become a Bruin,” she said. “I was involved with the Center for Excellence in Engineering and Diversity program and owe the organizers so much for their support in getting my degree. I was also in the all-female a cappella group Random Voices for all of my time in undergrad, and that left an indelible mark on my life as well.”

It hasn’t always been easy. As a Black woman navigating the STEM field, Sojobi said she has had to adapt her mindset to plot the course that has allowed her to find success.

“I had spent a lot of my adult life trying to ‘not think about race,’ and that had not helped me,” Sojobi said. “I’ve made a point to remind myself regularly that my enthusiasm for, and my curiosity about, my field are all the evidence I need that I belong where I am.”

“I also can’t ignore how excited these young ones often are to see a Black woman like me being part of something so cool as aerospace engineering,” Keji Sojobi said.

Nowadays, Sojobi dedicates her time to amplifying the voices of young women in STEM to inspire them to redefine what it means to be a leader in engineering and other STEM fields.

Having played a role in shattering traditional notions of what an engineer looks like, Sojobi made an appearance on the series premiere of Netflix’s “Ada Twist, Scientist” sharing Webb’s unfolding process as an example of how chain reactions work. The animated show follows 8-year-old Ada as she guides audiences through scientific discoveries and collaboration.

“Talking to young people about STEM is a major passion of mine,” Sojobi said. “I want to spread the awe and excitement that I felt as a kid, for space specifically, and for math and science in general. I also can’t ignore how excited these young ones often are to see a Black woman like me being part of something so cool as aerospace engineering.”

For Sojobi, she is no longer preoccupied with the fear that someone might think she doesn’t belong — she is too busy enjoying what she is doing. And that mentality has helped her stay focused and continue to grow as an engineer.