Engineering as Art: From James Webb Space Telescope to Pit Latrines in Uganda 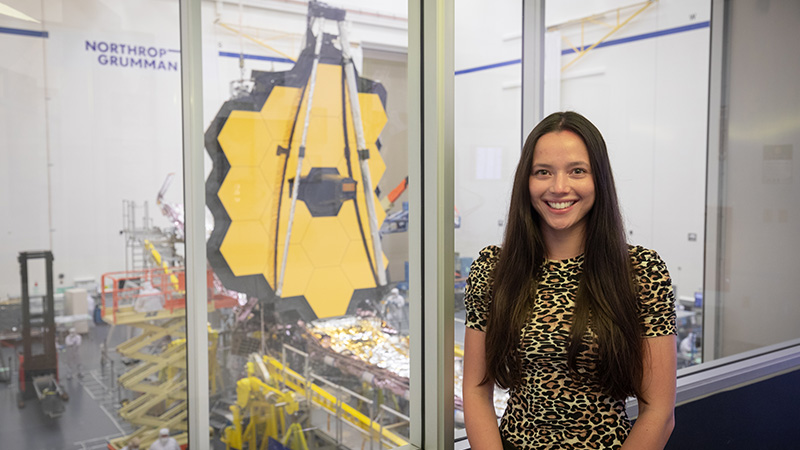 For Mei-Li Hey M.S. ’19, engineering isn’t all that different from art. In fact, the Northrop Grumman mechanical design engineer says that if she hadn’t discovered an enthusiasm for engineering, she probably would have ended up an artist.

“I like to think of design engineering as technically driven sculpture. I love that I am still able to exercise the creative side of my brain at my job,” Mei-Li Hey said.

Though she has now found a passion for engineering design, Hey said she didn’t always know what path she wanted to take. But growing up in West Chicago, Illinois,

Hey had the support and encouragement from her parents, twin brothers and the rest of the extended family.

“I was not sure that I wanted to pursue a career in STEM until I was a junior in high school and took a summer course at Northwestern University called ‘Nanotechnology,’” she said. “I learned about mechanical engineering during this summer course, and I thought that it exercised the creative, artistic part of my mind while also calling on my favorite subjects like math and science.”

Hey started out at Northrop Grumman as a mechanical engineering intern while she was getting her bachelor’s degree at the University of San Diego. After graduating in 2017, she began pursuing her master’s degree at UCLA while also working at Northrop Grumman in a full-time position, diving headfirst into the fast-paced environment of building the Webb telescope.

“I was given a lot of responsibility and trust as a fairly new engineer, and I was able to prove myself and my abilities quickly,” she said. “One of my favorite things about Webb was the people. Everyone worked their hardest because this project and its mission was inspiring, and it is much easier to get through long days when you know there are others right there with you — willing to do what it takes to get the job done.”

Hey designed the mechanical ground support equipment on the Webb telescope that was needed for the integration and testing of different systems and subsystems of the telescope. Later on, her role evolved into doing less design work and focusing more on supporting the floor operations.

“I loved this part of the job because it was where the most fast-paced part of engineering solutions happened,” she said of her time on floor operations. “My lead, Jonathan Chang — who is also a UCLA alum — and I were ‘firefighters’ whose job it was to deal with the seemingly constant issues that arose on the floor as integration and testing of the telescope chugged along.”

Throughout it all, Hey manages to find threads of creativity and art in the work she does. For example, a great deal of the designs she produces are modeled using computer-aided design (CAD) software, which she says is a lot like sculpture. In her free time, making art pieces out of old computer parts or sculptures out of clay are some of her favorite activities.

In addition to her work at Northrop Grumman, Hey also co-founded Uganda-based Atwero in April of 2020. The nonprofit organization builds assistive devices to help those with disabilities independently use a pit latrine in a safe and sanitary manner. Pit latrines are just a hole in the ground and are the most common bathroom facility found in the East African country. They require a user to squat, which creates many challenges for individuals with disabilities.

When Hey was an undergraduate student, she was inspired by Margaret Orech, founder of the Uganda Landmine Survivors Association, who came to the university to speak about her experiences being a person with a disability in Uganda. During her talk, Orech said that the hardest part of adjusting to life with a handicap was using a pit latrine and that there was a need for assistive devices to help with this problem. Hey decided to put her problem-solving skills to test and designed a solution for those who do not have full use of their lower extremities. Her team came up with a design that is low cost, portable, easily manufacturable and allows people to sit down while using the latrine — essentially a specialized folding chair.

“Because of the constant demand and positive feedback that we receive on the pit latrine assistive devices that we fabricate, Atwero has continued to grow,” Hey said. “We now have a couple of employees in Uganda working on the fabrication and distribution of the devices.”

Reflecting on her career path, Hey says that there have been many times she has doubted herself and whether she belonged in the field, but over time she learned to acknowledge and accept her struggles, which allowed her confidence to grow.

“I have learned to recognize the feeling of imposter’s syndrome much quicker when I am experiencing it, and the recognition makes it much easier to overcome,” she said. “Still, it is important for women in STEM to understand that this type of self-doubt has a name, and many people — especially women — experience it in the STEM field.”