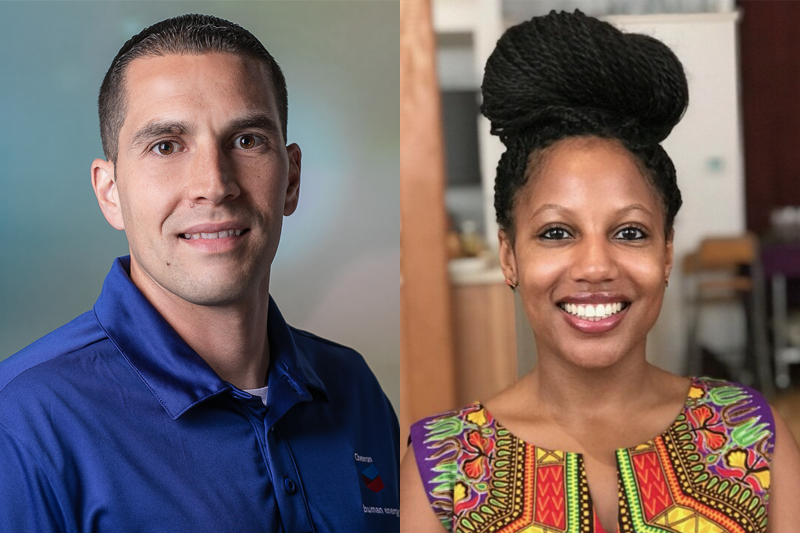 Through its scholarships and mentoring programs, the UCLA Center for Excellence in Engineering and Diversity (CEED) provides students from groups that are traditionally underrepresented with opportunities to succeed at UCLA and beyond, broadening the pool of diverse engineers entering the field upon graduation. About 330 undergraduates currently participate in CEED, making up approximately 8% of the UCLA engineering student body.

In a recent interview, we spoke with two CEED alumni who shared their personal experience with the program.

Carlos Castrejon graduated from UCLA in 2007 with a bachelor’s degree in mechanical engineering. He is now working at Chevron’s El Segundo refinery as a turnaround event coordinator.

Castrejon’s work involves planning and executing turnaround events — when large sections of the refinery are shut down for inspection, maintenance and repairs. He is currently planning a $150 million turnaround scheduled for 2021. Castrejon credited CEED at UCLA for making an impact on his professional development.

“From the beginning of my college experience, CEED provided academic support and exposed me to a network of students who had similar backgrounds and academic goals,” Castrejon said. “The individuals in this network became my extended family of which many I still interact with regularly.”

Castrejon added that CEED gave him access to scholarships and opportunities to gain experience — both of which came in handy.

CEED also helped Castrejon succeed at Chevron once he got there, with the experience and skills he acquired through the program.

“CEED had a significant impact on my professional career. During college they helped me hone my leadership, teamwork and communication skills,” Castrejon said. “CEED ingrained me with a strong desire to give back, to mentor others and to look out for the well-being of others. All of these skills and qualities have allowed me to align and inspire others, to build relationships, to grow the capabilities of myself and others, and ultimately to deliver results for Chevron.”

Castrejon’s involvement in CEED did not end with his graduation — he returned as a supporter of the program. Most recently, he was one of the first donors to CEED’s $31,000-in-31-days campaign — launched to celebrate the legacy of the former CEED director Enrique Ainsworth on his retirement after spending 31 years at UCLA. Castrejon, along with his brother Hugo, has provided a scholarship to CEED students.

In her second year at UCLA, Regan Patterson considered switching out of the engineering program, but the staff at CEED encouraged her to stay. Today, the 2013 chemical engineering graduate conducts research, organizes events and advises members of Congress on transportation policy as a fellow at the Congressional Black Caucus Foundation (CBCF).

Patterson, who subsequently earned an M.S. and Ph.D. in environmental engineering at UC Berkeley, said that CEED had a significant influence on her as a UCLA engineering student.

“Because of CEED, I entered into undergrad not alone, but with a community of students and staff that would support my academic and personal journey,” Patterson said.

Patterson was introduced by CEED to the National Society of Black Engineers where she served in several leadership positions. CEED also provided her the opportunity to engage with marginalized youth and participate in outreach programs for underrepresented students.

“My speech focused on our obligation as engineering graduates to use our unique position of influence and responsibility to benefit broader society, a lesson I learned from my experiences with CEED,” Patterson said.

Patterson said CEED helped advance her career through exposing her to research from her very first quarter as an undergraduate student. These experiences influenced her decision to further her education at UC Berkeley. Her doctoral thesis covered how rerouting trucks affected air pollution levels in urban environments.

After a postdoctoral appointment at the University of Michigan’s Social Environment and Health Program, Patterson now uses her expertise on the intersection of air pollution and environmental justice as the Transportation Equity Research Fellow at the CBCF in Washington D.C. Patterson conducts intersectional policy analysis and research, and organizes the caucus’ annual legislative conference session, which this year included Rep. Ayanna Pressley who represents parts of Boston and surrounding suburbs.

As her career advances, Patterson is looking to return to academia or to remain in the policy space.