Launch a rocket, or build and race a go-kart in your very first quarter at UCLA? That’s what a few dozen first-year engineering students got to do this past fall.

With the opening of the new Boelter Hall Makerspace in September, the UCLA Samueli School of Engineering expanded its offerings for introduction to engineering design courses. The two-unit classes are aimed at freshmen, who must work in teams and complete a quarter-long project. These new Engr-96A classes are designed and taught by undergraduates, who have already proven themselves with their involvement in student projects. Bioengineering professor Jacob Schmidt oversees all the classes.

In fall quarter, classes on building rockets and go-karts were offered. In winter quarter, those classes will again be offered along with four new courses: 3D pharmaceuticals, soap synthesis, electrocardiograms and virtual reality. 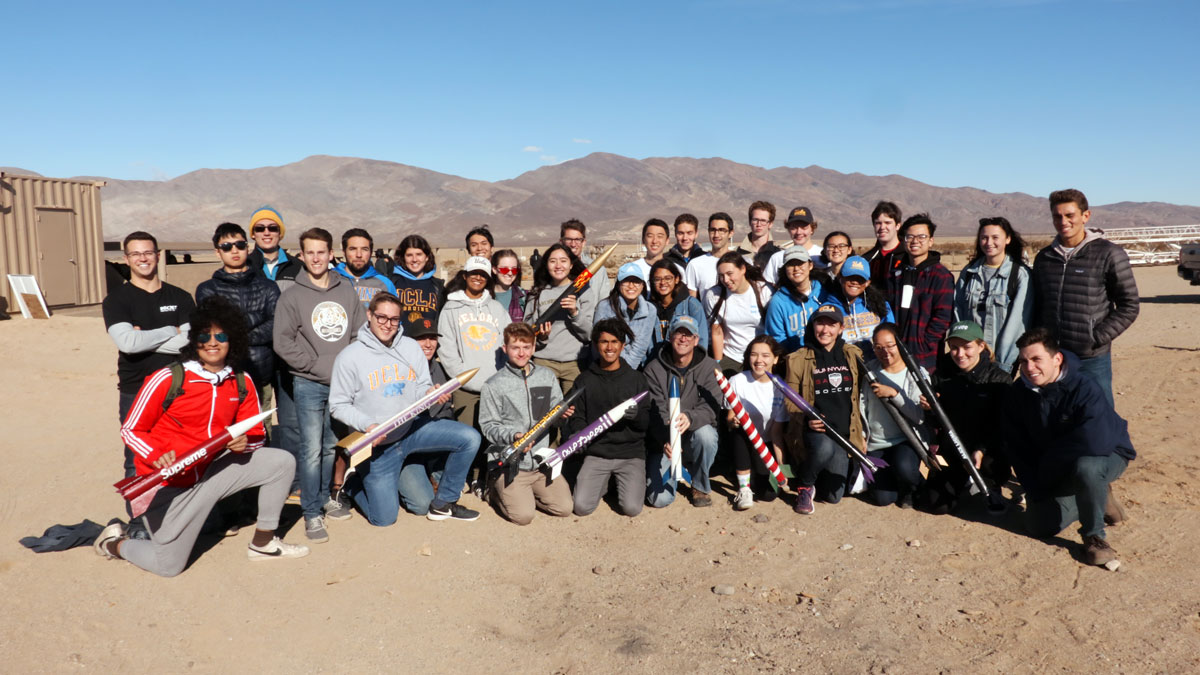 How did you find out about the class? And what got you interested in it?

Claire Sterling: I found out about the class during the spring when I was trying to choose where I wanted to go to college. I was looking through the catalog – specifically the engineering classes – and I saw the engineering design classes. That was really exciting to me because I’d heard comments that UCLA “was too theoretical,” and coming in with almost no engineering or project experience, I wanted to develop applicable skills and actually make things.

Jeremy Lim: In short, this class was the reason I chose to come to UCLA. I was very concerned that if I came to UCLA, I would not be getting as much hands-on experience as an engineer compared to some other tech schools I was accepted to. However, after finding out about this class and the construction of the Makerspace, my perspective changed completely.

Ross Valantine: I found out about the class during my new student orientation over the summer. I became intrigued because the class offered hands-on experience right away, taught by other undergrads that have an extraordinary amount of knowledge in the area. Plus, since it was a pioneer class, I wanted to be a part of something that’s the first of its kind.

Rebecca Celsi: I was introduced to the class through the CEED (Center for Excellence in Engineering and Diversity) program. The directors pointed out the value of a class focused on design, machining, and construction of a machine like a go-kart. While I had not previously considered building go-karts or exploring automotive engineering, I was excited to begin the class and my interest only grew as I progressed.

Trevor Gomez: I first heard about the class during orientation, when my new student advisor recommended it to my group. It was introduced as a great way to get technical experience early on in my academic career, and I quickly became interested. 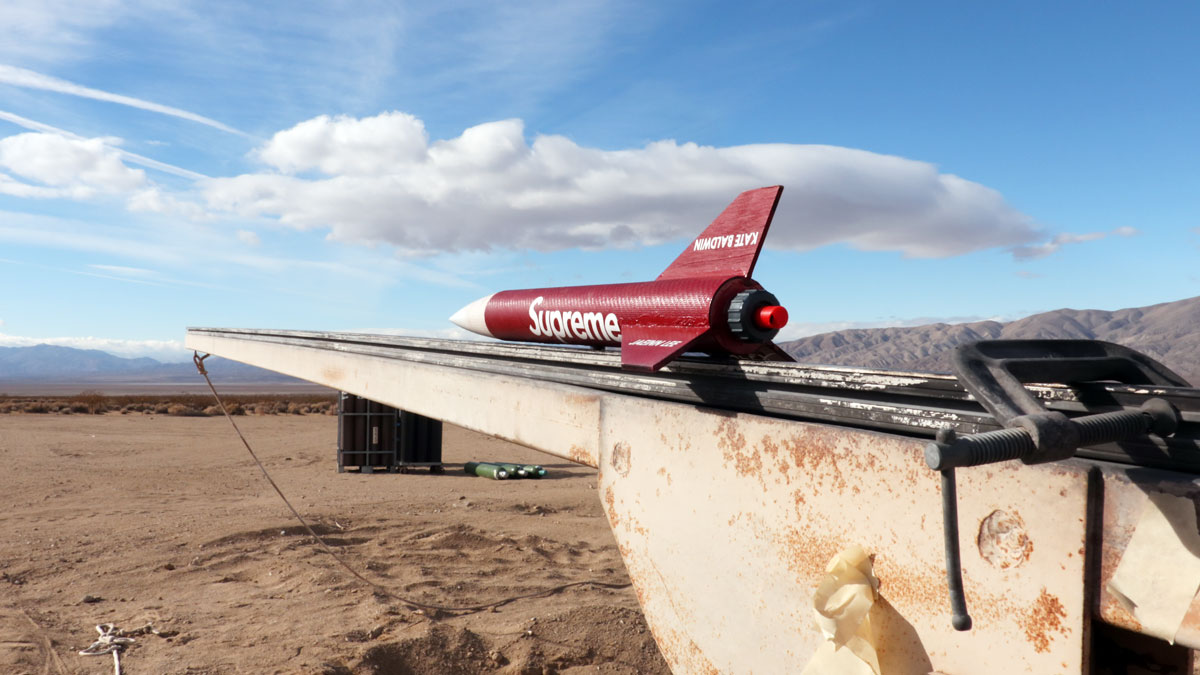 How did your team’s project go?

Elizabeth Nail: Our team’s rocket performed to fine form! The main requirements for the class were that the rocket hit within 600 feet of a 2,750-foot apogee, and that the chicken egg we were supposed to put in the rocket should last the flight. Our apogee we estimated (averaging data from our two altimeters) to be 2,950 feet, and our egg survived! Some of the shell came off but the membrane was intact, which was thrilling. We had also put electronics in the rocket, which was a personal goal of the team, and the data readings from the gyroscope came out confusing (the rocket spun a lot, is all we can tell), but the barometer and thermometer results were accurate and pretty satisfying to see.

Alexandra Orloff: Our go-kart performed really well. We designed it to be narrower in the front to increase maneuverability and we chose our gear ratio to maximize power and acceleration over top speed, which helped us win the race.

Riley Hoff: Our rocket performed well, with a few minor errors when it came to the parachute deployment and recovering. The parachute got entangled (or so we believe) and didn’t slow the rocket’s descent as we had hoped, resulting in a minor crash when it landed and a small crack in the body tube. This was a result of poor packing of the parachute into the body tube as the ropes got tangled. If we launched again, we would ensure that the parachute would not get tangled and figure out a better way to pack the parachute in. Other than that, the rocket flew very well and performed how we expected. 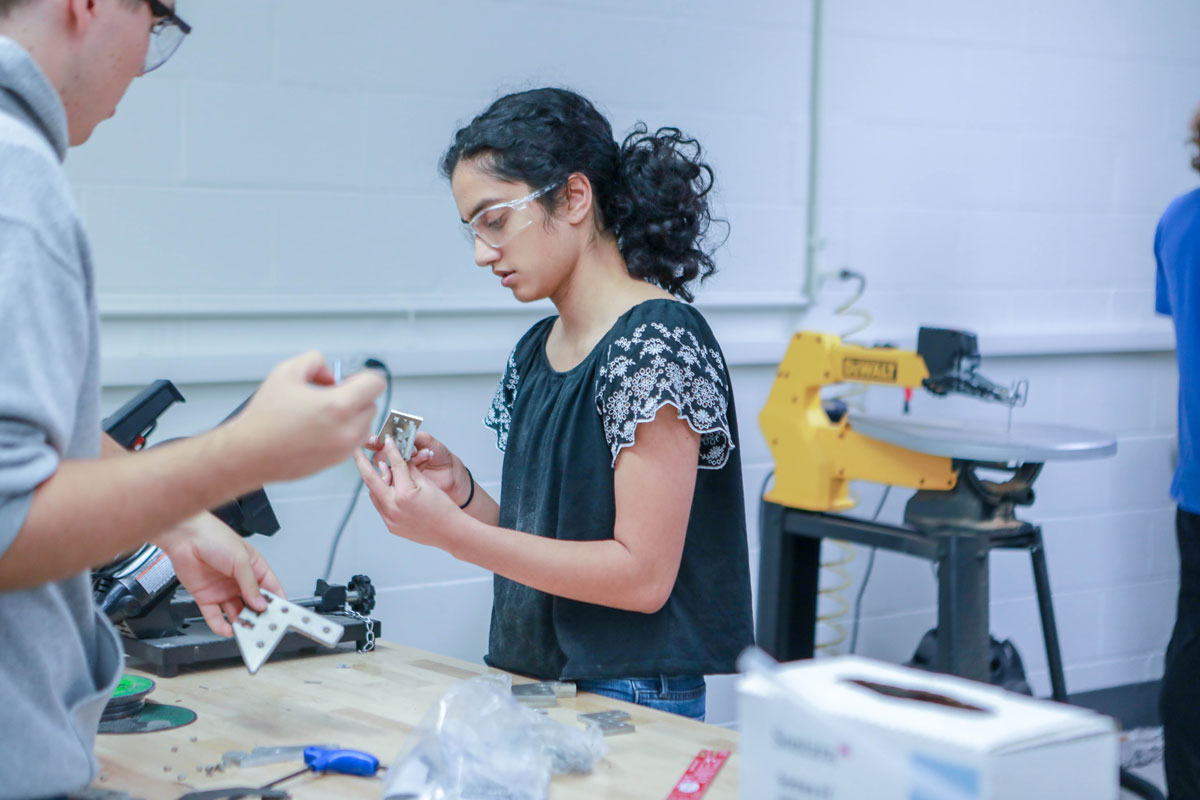 What was your favorite part of the class and why?

Gomez: My favorite part of the (go-kart) project was the design process, because it enabled me to open up my creative mind and create something that I visualized in my mind in a program that defined and cemented an idea. This program also allowed for easy troubleshooting and problem solving which I feel is the root of engineering. 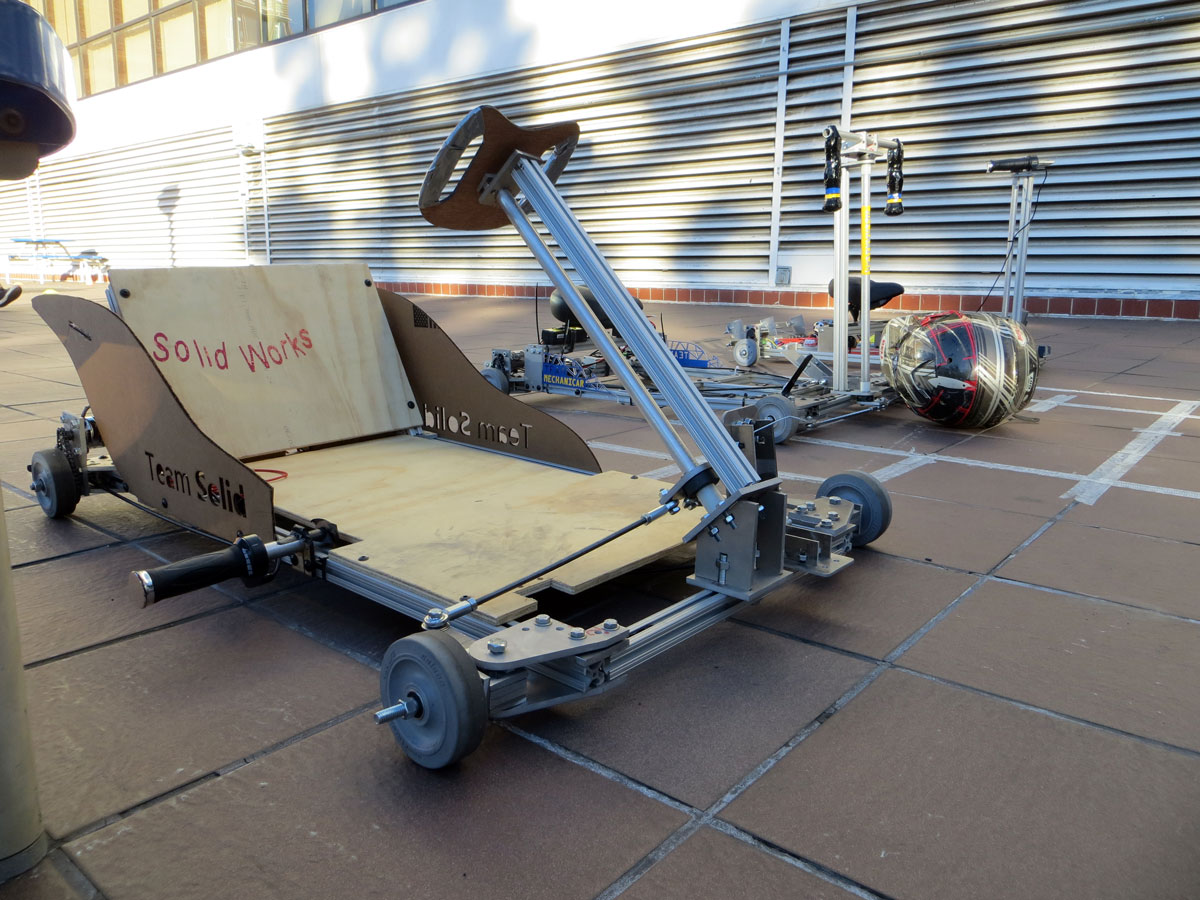 Nail: The desert launch was by far the best part. We bundled up, left at 6 a.m. sharp, made a pit stop in Palmdale for donuts and caffeine, and then spent the day in the blustery, beautiful desert launching rockets. It was glorious. To see something we’d spent so much time and love on explode up into the sky was incredible; when the rocket flew so high it disappeared into the clouds we all held our breath; and after successful recovery of the rocket and the egg we were beaming for the rest of the day.

Orloff: There were six people on my team and my favorite part of the class was seeing how all of our individual parts came together to create a working go-kart.

Celsi: My favorite part was the assembly of the various subsystems, once the parts were machined, and the experience of seeing the CAD files re-created exactly in physical form. I liked the tactile nature of working with bolts and aluminum pieces to construct something tangible. And of course, our test days were a lot of fun as we finally saw everything functioning.

Valantine: My favorite part of the process was using the lab (Makerspace) in Boelter Hall to lay carbon fiber, and to 3D-print and laser-cut parts. Most of all, assembling the parts a few days before launch and spray painting the rocket really solidified our many hours of work into one finalized product. That made me feel a real sense of accomplishment.

What did you think of the class now that you’ve finished?

Sterling: I think this class is fantastic. On the first day of class, when our instructors were telling us about all the things we would be doing this quarter, I was intimidated and didn’t really believe I’d ever understand what was going on. They walked us through the process of designing rockets, creating 3-d representations of them, and then building or printing them without it ever feeling like it was a problem when I didn’t know things. On another note, I’m not sure I would have joined the Rocket Project club, which I absolutely love, otherwise.

Hoff: This class is a great experience overall, 15 out of 10. It really opened my eyes to the design side of engineering. Sure, you can know all of the formulas and equations but if you don’t know how to efficiently apply them they are no use. It is a great option to learn about design and rocketry.

Lim: I thought the class was amazing. The group tutors did an amazing job mentoring us to build our own rockets. I learned how to use the laser cutter, vinyl cutter, 3D printers, and most importantly, how to lay carbon fiber. I never thought that I would be able to take a class so soon to gain so much hands-on experience at UCLA.

What can a prospective student expect if they take the class? And how can they get the most out of it?

Lim: A prospective student can expect to come to a learning environment that does not even feel like work. Throughout the whole process of working on stuff for this class, I never felt like it was work. It only felt like fun. A student can expect to learn how to use countless tools and more if they have never had hands-on experience before. They can expect friendly, responsive, and encouraging group tutors to guide them along the way.

Sterling: I think it’s an amazing class that gives you room to think, learn, and experiment without worrying about tests or doing things “right.” You should expect to work with groups of people and spend a lot of time in the makerspace. You’ll get the most out of it if you’re excited about the subject, make an effort to make friends with your group, and put time into making your rocket match your ideals.

Orloff: This class is a lot of work, but it is a great experience. Prospective students can expect to learn how to use SolidWorks, a 3D design software program, and be trained in the machine shop. It is a very hands-on class, which makes it fun

Hoff: A prospective student can expect to delve straight into material of design and rocketry within the first week of the class, and learn practical applications for design, as well as become familiar with different basic machining techniques. If one wants to get the most out of this class, they have to truly be involved in the class. As the saying goes, “you get out what you put in.” This holds true for this class as well. 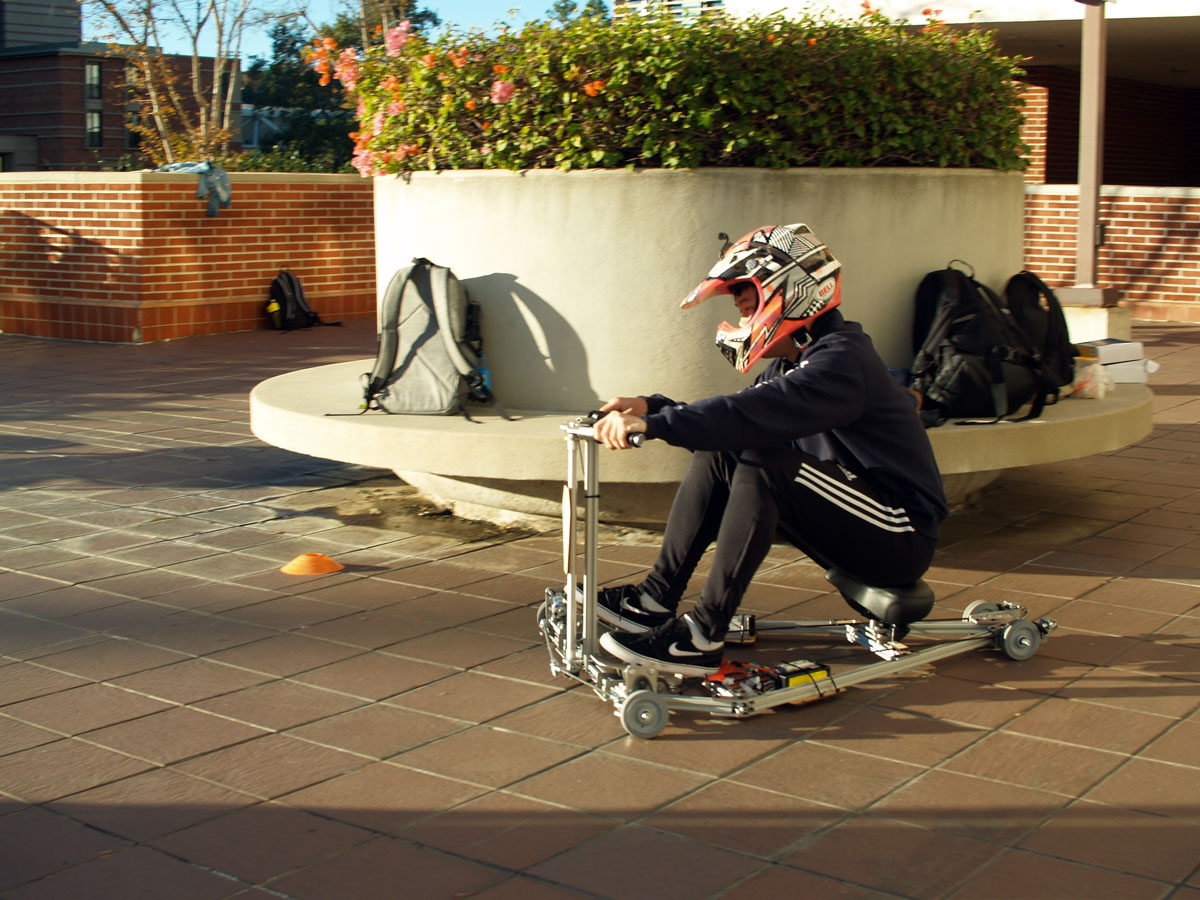