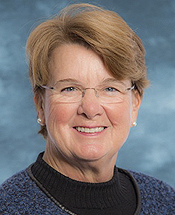 Joanne Maguire retired as Executive Vice President of Lockheed Martin Space Systems Company in May 2013 after nearly seven years as its leader. LM Space Systems, with 2012 sales of more than $8 billion, provides a broad array of advanced-technology systems to government and commercial customers. Chief products include human space flight systems; satellites for remote sensing, navigation and communications; strategic and missile defense systems; space observatories and interplanetary spacecraft. She joined Lockheed in 2003. Prior to Lockheed, Ms. Maguire enjoyed a productive career at TRW’s Space & Electronics sector (now part of Northrop Grumman) filling a range of progressively responsible positions from engineering analyst to Vice President and Deputy to the sector’s CEO, serving in leadership roles over programs as well as engineering, advanced technology, manufacturing, and business development organizations.

Ms. Maguire serves on the board of directors for CommScope Holding Company, Inc. and Visteon Corporation. She serves as a board member for the Charles Stark Draper Laboratory, an independent non-profit research and development organization.

She is the first woman to receive the prestigious International von Karman Wings Award presented by the California Institute of Technology in 2010 for her visionary accomplishments in space, and was honored with UCLA’s Alumni Achievement Award in 2010. She has been selected numerous times by Fortune magazine to its annual list of “50 Most Powerful Women in Business.” In 2009, she received the Society of Women Engineers’ Upward Mobility Award in recognition of her outstanding contributions in aerospace engineering and for pioneering work in technology and diversity management.

She earned a bachelor’s degree in electrical engineering from Michigan State University and a master’s degree in engineering from UCLA. Ms. Maguire also completed the executive program in management at UCLA’s Anderson School of Management and the Harvard Program for Senior Executives in National and International Security. She was elected to the National Academy of Engineering in 2011 and is a fellow of the American Institute of Aeronautics and Astronautics (AIAA), and a member of the International Academy of Astronautics (IAA).