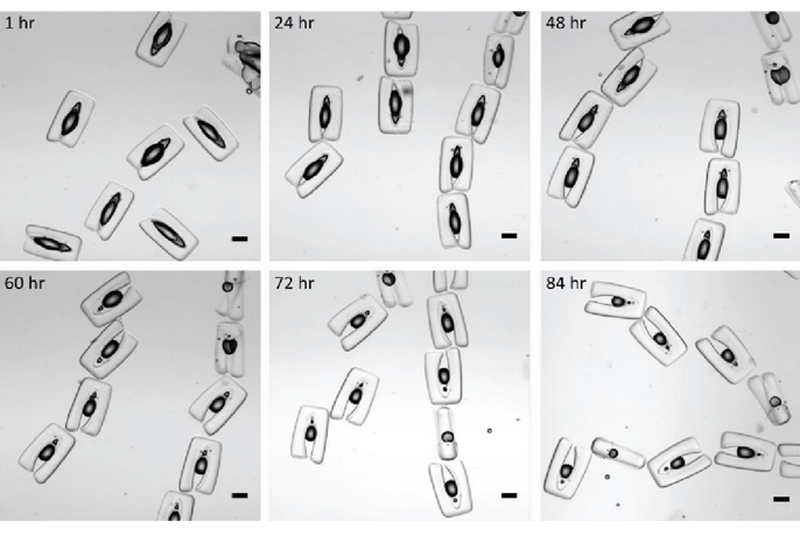 Dino Di Carlo
Images showing the volume can be maintained over several days inside U-shaped cups that are each about a half-millimeter in length. A slow reduction in the volume of drops is presumably due to dissolution of water in the oil phase and evaporation over time.

If you have ever shaken a salad dressing bottle mixed with oil and vinegar, you have temporarily created an emulsion. However, that state is temporary, and the two components soon separate. But, what if you could create a stable emulsion in which all of the tiny droplets stay at a uniform size for a long time? UCLA bioengineers and mathematicians have done just that, inventing the first-ever “armored” emulsions.

The armor comes in the form of tiny soft U-shaped cups, about a half-millimeter in length. With a hydrophobic (water-repelling) exterior and hydrophilic (water-attracting) interior, each U-shaped particle captures a fluid droplet resulting in an emulsion that stays intact following mixing. The technology opens up new avenues in pharmaceutical and chemical production, biological research and diagnostics.

A study detailing the research was recently published in Science Advances.

“They’re like tiny test tubes, but thousands of times smaller than the ones currently used in laboratories,” said study leader Dino Di Carlo, a bioengineering professor at UCLA Samueli School of Engineering and UCLA’s Armond and Elena Hairapetian Professor of Engineering and Medicine. “Unlike traditional test tubes, these ones automatically fill up to hold a volume of fluid about the size of a single cell. And as they’re uniform in size, they are ideal to carry out repeatable chemical reactions. This is a fundamental requirement in biological research and health diagnostics.”

In collaboration with Andrea Bertozzi, a distinguished professor of mathematics at UCLA and the Betsy Wood Knapp Professor for Innovation and Creativity, the team first created mathematical models describing how the geometry and surface properties of each cup interact with fluids to hold uniform volumes. The U-shaped cups are manufactured using a new microscale 3D-printing approach previously developed by Di Carlo’s research group.

“This is one of the most interesting applications of minimal surfaces in geometry that I have seen in a long time,” said Bertozzi, whose team used a numerical method first applied to simulate 3D volume tilings to study the optimal volume configurations for the particles. 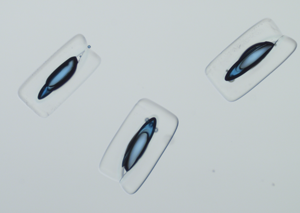 The particles allow chemical reactions to occur on many individual cells simultaneously. Cells can be kept alive inside the emulsion and identified for a desired characteristic, such as a high production of enzymes or antibodies, or resistance to a drug. Because of the tiny entrapped liquid volumes, the products of reactions from small numbers of cells or molecules can accumulate to high levels within hours instead of days. These capabilities can be important for speeding up the discovery of new drugs and expediting health diagnostics, such as for bacterial infections or cardiovascular diseases.

In addition to imparting long-term stability on the emulsion, the U-shaped particles could introduce a range of other physical and biochemical properties. The surface chemistry of the particles can be modified to capture specific target markers of disease. In addition, the shape of the particles provides a unique method of identifying each reaction, similar to a barcoded number written on the side of a test tube. Another recent paper by the group, which was published in Lab on a Chip, expands on the number of possible particle shapes.

“We think this new ‘lab-on-a-particle’ approach shows promise to leapfrog previous ‘lab-on-a-chip’ systems by eliminating the need for complex pumping and control systems,” Di Carlo said. “Making and using the armored emulsions are both quite easy with commonplace laboratory equipment like pipettes and centrifuges. This could allow more research labs around the world to conduct impactful research without significant investment on equipment.”

Other authors of the study include lead author Chueh-Yu Wu, Joseph de Rutte, Mengxing Ouyang and Alexis Joo, all from UCLA bioengineering and members of Di Carlo’s research group; and Bao Wang, Matthew Jacobs and Kyung Ha of UCLA mathematics, all members of Bertozzi’s research group.

Di Carlo and Bertozzi both hold faculty appointments in mechanical and aerospace engineering, and are members of the California NanoSystems Institute. Di Carlo is a member of the Jonsson Comprehensive Cancer Center.

The research was supported by a grant from National Institutes of Health and a Simons Foundation Math+X Investigator Award.