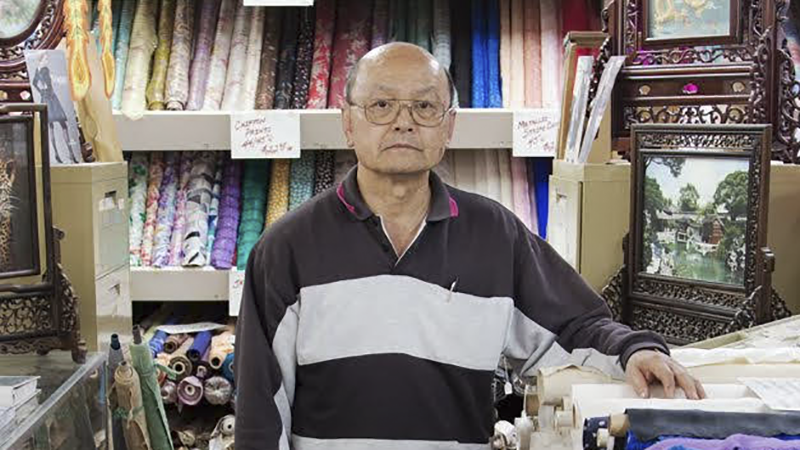 UCLA Samueli Newsroom
Kenneth Wong ’69, M.S. ’72 had been an aerospace engineer for nearly two decades before he changed tack and took the helm of his parents’ Chinese silk store.

After more than 30 years running the business, Wong has now stepped down from his multifaceted career and is giving back to his alma mater through a scholarship honoring his mentor at UCLA.

The oldest son in a Chinese immigrant family, Wong’s father was a World War II veteran, while his mother and older sister are survivors of the second Sino-Japanese War. After immigrating to the U.S., Wong’s parents ran a laundry business while raising six children. Wong and his siblings, who all went to college, were taught early on by their parents that education is a means to a better life.

As a child, Wong had an early fascination with science and design. Though he was a self-described average high school student, Wong was committed to going to college and decided at first to pursue a major in electrical engineering at UCLA. But he soon found he lacked the inherent feel for circuits needed in the field, opting instead to focus on the then-burgeoning discipline of computer science.

“Education at UCLA was not easy for me,” Wong said. “I learned the value of hard work since I was not as bright as many of my classmates. You don’t have to be the brightest; you just have to persevere.”

Wong said he had some help along the way, with then-computer science professor Lawrence McNamee as a mentor who helped him through his classes and has remained a close friend long after Wong graduated.

After getting his master’s in computer science from UCLA, Wong worked as a computer systems design engineer, helping design the first digital avionics in the Air Force Avionics Laboratory. He continued his aerospace engineering career, working at a number of companies including the TRW Defense and Space Systems Group, Northrop Corporation, Hughes Aircraft Company, NASA’s Jet Propulsion Laboratory, AT&T Bell Laboratories and Westinghouse Electric Corporation. Wong specialized in computer graphics and man-machine interface as applied to avionics and tactical displays, with a particular interest in designing and developing solutions.

“I came to realize that running a business was about problem solving, which is what my engineering education had prepared
me for,” Wong said.

Nearly two decades into his aerospace engineering career, Wong found himself at another crossroads — this time taking on something completely unrelated to his profession as an engineer.

After running a Chinese laundry in Los Angeles for almost 25 years, Wong’s parents thought they were ready to retire until they found a new passion, launching Oriental Silk in 1972 to import Chinese silk in light of normalizing relations between the U.S. and China in the early 1970s. The company became the first Chinese silk importer in Los Angeles and Wong’s parents wanted one of their children to take over the business when it came time for their retirement.

Wong took it upon himself to keep the store alive even though he had no prior experience in the silk business.

“I had watched my parents put in years of blood and sweat to build a successful business, and I just could not let them just throw it away,” Wong said.

Under Wong’s leadership, the Beverly Hills-based store has since become a staple silk supplier within the interior design and entertainment industries. The store has supplied silks that were used in multiple Academy Award-winning costume designs, including “Memoirs of a Geisha” in 2006 and “Topsy-Turvy” in 2000. Oriental Silk’s fabrics were also used in 2021’s “Shang-Chi and the Legend of the Ten Rings,” which has broken numerous box-office records.

“I came to realize that running a business was about problem solving, which is what my engineering education had prepared me for,” Wong said. “There are not the intellectual challenges that you face as an engineer, but there is the everyday problem solving that is required to run a business.”

Even as he was working as an engineer, Wong had always enjoyed the design process of his work almost as much as actually creating working solutions. Taking over Oriental Silk gave him the opportunity to further lean into that passion and work directly with many creative people to help them bring their visions to life.

“I had always been fascinated by the creative process, so I had a front-row seat to exploring how others create,” Wong said. “I found that the design process is basically the same [as in engineering] — you are just dealing with a different medium.”

“It’s not how bright you are but how persistent you are,” Wong said. “Find the passion in your life. An engineering education
trains you for life.”

With the success of Oriental Silk, Wong decided in 2019 to establish a UCLA Samueli School of Engineering undergraduate scholarship in Professor Emeritus McNamee’s name.

“My culture teaches us to honor both our elders and our teachers,” Wong said. “Professor McNamee was my mentor during my time at UCLA and afterwards while I was raising a family. He has had a profound influence on my life more than anyone else, other than my parents.”

In creating the scholarship, Wong hoped to support high-achieving engineering students, especially those with a focus on computer engineering and computer science.

“I hope that the future recipients of this scholarship will be fortunate enough to find someone like [McNamee] in their lives,” Wong said.

In 2020, just two years shy of the store’s 50th anniversary, Wong took an opportunity to sell Oriental Silk and retire.

Looking back on his career, Wong has learned many lessons, the most important of which he says is to trust that hard work and dedication will get you far.

“It’s not how bright you are but how persistent you are,” Wong said. “Find the passion in your life. An engineering education trains you for life.”