Researchers from UCLA Samueli School of Engineering, Rice University and UC Santa Barbara have developed an easier and greener way to create syngas.

A study detailing their work is published today in Nature Energy.

Syngas (the term is short for “synthesis gas”) is a mixture of carbon monoxide and hydrogen gases. It is used to make ammonia, methanol, other industrial chemicals and fuels. The most common process for creating syngas is coal gasification, which uses steam and oxygen (from air) at high temperatures, a process that produces large amounts of carbon dioxide.

One more environmentally friendly way to create syngas, called methane dry reforming, involves getting two potent greenhouse gases to react — methane (for example, from natural gas) and carbon dioxide. But that process is not widely used at industrial scales, partly because it requires temperatures of at least 1,300 degrees Fahrenheit (700 degrees Celsius) to initiate the chemical reaction.

Over the past decade, researchers have tried to improve the process for creating syngas using various metal alloys that could catalyze the required chemical reaction at lower temperatures. But the tests were either inefficient or resulted in the metal catalysts being covered in coke, a residue of mostly carbon that builds up during the process.

In the new research, engineers found a more suitable catalyst: copper with a few atoms of the precious metal ruthenium exposed to visible light. Shaped like a tiny bump about 5 nanometers in diameter (a nanometer is one-billionth of a meter) and lying on top of a metal-oxide support, the new catalyst enables a chemical reaction that selectively produces syngas from the two greenhouse gases using visible light to drive the reaction, without requiring any additional thermal energy input.

In addition, in principle, the process requires only concentrated sunlight, which also prevents the buildup of coke that plagued earlier methods. 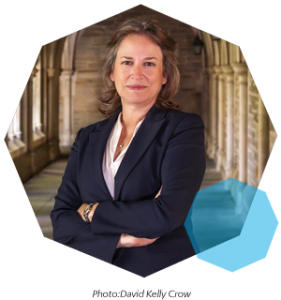 “Syngas is used ubiquitously in the chemical industry to create many chemicals and materials that enable our daily life,” said Emily Carter, a UCLA distinguished professor of chemical and biomolecular engineering, and a corresponding author of the paper. “What’s exciting about this new process is that it offers the opportunity to react captured greenhouse gases — reducing carbon emissions to the atmosphere — while creating this critical chemical feedstock using an inexpensive catalyst and renewable energy in the form of sunlight instead of using fossil fuels.”

John Mark Martirez, a UCLA assistant project scientist, performed the quantum mechanical analysis of the reaction, showing the step-by-step, atom-by-atom process of the chemical reaction that creates the gases.

The study’s first author is Linan Zhou, a postdoctoral scholar at Rice. Other senior authors include professors from Rice, Naomi Halas and Peter Nordlander, and from UC Santa Barbara, led by Phillip Christopher.

The research was supported by the Air Force Office of Scientific Research via the Department of Defense multidisciplinary university research initiative program, and by the Welch Foundation, which supports fundamental research in chemistry.