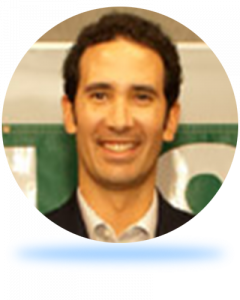 Dr. Nicolas Luco is a Research Civil Engineer with the U.S. Geological Survey (USGS) at its Geologic Hazards Science Center in Golden, Colorado. There he currently serves as a Task Leader for the Engineering & Risk project and collaborates with the National Seismic Hazard Modeling Project. He also serves as a USGS Liaison on numerous external engineering committees (e.g., of the American Society of Civil Engineers) that develop the seismic provisions of U.S. construction codes. His research primarily focuses on methods used in designing or retrofitting structures to resist earthquakes, such as the risk-targeted approach that was adopted in U.S. building codes in 2009. Dr. Luco also conducts research on probabilistic assessment of the risk to structures and people from natural hazards, mostly earthquakes but more recently rockfalls as well. Prior to joining the USGS in 2004, Dr. Luco was a Senior Analysis Engineer with the catastrophe risk modeling company AIR Worldwide Corporation. He earned his Ph.D. (2002) and B.S. (1995) in civil/structural engineering, and an M.S. in statistics (2000), from Stanford University. Dr. Luco’s M.S. in civil/structural engineering (1996) is from the University of California, Berkeley.