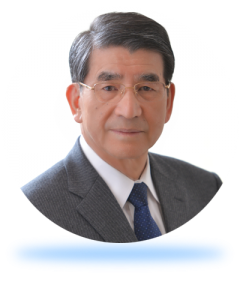 Masanori Hamada is recognized as a researcher for the earthquake engineering of critical infrastructures. He had engaged in the earthquake resistant design and the construction of bridges, dams, port and harbor structures, and nuclear power plants at Taisei Corporation (1968~1983) after receiving M. Eng. at University of Tokyo.

As a Professor of Marine Civil Engineering Dept. of Tokai University (1983~1994) as well as Civil and Environmental Engineering Dept. of Waseda University (1994~2014), he researched on earthquake and tsunami resistant structures, and contributed to development of technologies and strategies for natural disaster mitigation. He also have carried out the investigation into the damage caused by natural disasters in the world, and based on these research results he recommended the strategies and the practices for disaster reduction for the governments and local societies.

As the President of Japan Society of Civil Engineers (2006~2007), of Institute for Social Science Society (1997~1999), and of Japan Association for Earthquake Engineering (2009~2010), he established cooperative and collaborative relationships with experts and researchers in oversea countries in order to reduce the natural disasters in the world, particularly in the Asian Region. Dr. Hamada organized many international research teams for reduction of natural disasters and has promoted those activities.

He chaired the Committee on International Cooperation for Natural Disaster Mitigation as a member of the Science Council of Japan, and issued the recommendations for the international assistances to the Japanese government, the public organizations, universities, and private sectors.

He inaugurated the chairman of the Asian Disaster Reduction Center in 2014, which was established in 1998 by 31 member countries in the Asia according to an United Nations General Assembly Resolution during the International Decade(1990～1999) for Natural Disaster Reduction (IDNDR).He led the ADRC’s activities on information sharing on the natural disasters in the world and on the policies for the recovery and reconstruction of the affected areas.

He authored and co-authored 5 technical books and more than 100 academic papers, and applied the research results to the practice for the mitigation of earthquake and tsunami disasters.

During past earthquakes in the world, industrial parks in waterfront areas have been repeatedly damaged. The main causes of the damages to the industrial facilities were the soil liquefaction of man-made islands reclaimed from waters, it’s induced large ground displacements, and the earthquake ground motions amplified by soft reclaimed soil, and tsunamis.

Heavy damages to energy industries by future earthquakes and tsunamis will seriously affect living and safety of the people, as well as the world-wide economic activities.  The enhancement of earthquake resistance of energy industries is one of the most urgent subjects around highly urbanized areas such as the Tokyo and Osaka Bays in Japan.  A national project has been carried out by the Japanese government for the reinforcement of the energy industries all around Japan since 2014.