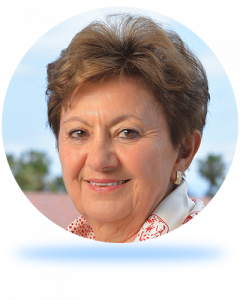 Anne Kiremidjian is a professor of civil and environmental engineering at Stanford University. Her research focuses on earthquake hazard and loss modeling and structural health monitoring for extreme events. Within the area of earthquake hazard and risk modeling, she has developed methods for time-dependent earthquake occurrences, regional hazard mapping, regional loss assessment, and lifelines risk analysis of water, transportation and power systems. Within the area of structural health modeling, her research includes the development of wireless sensors and sensing networks for structural performance evaluation, the development of novel damage detection and localization algorithms utilizing data from the sensor network using advanced data analytics, statistical and machine learning methods.  Professor Kiremidjian has held a leading role in research in lifeline earthquake engineering by assessing the seismic risk to the California Aqueduct (1976), the development of transportation network systems as applied to the San Francisco Bay Area (1997-2006), and, most recently, models for evaluating the resilience of electric power systems through the formation of microgrids from rooftop solar systems within communities. For her research with her students, Dr. Kiremidjian has been recognized with numerous awards including the Extraordinary Achievement Award in Loss Estimation from Applied Technology Council and the C. Martin Duke Award for Excellence in Lifeline Earthquake Engineering Research by the American Society of Civil Engineers (ASCE). In 2014 she was elected Distinguished Member of the American Society of Civil Engineers, then in 2017 she received the Lifetime Achievement Award at the International Workshop on Structural Health Monitoring. In 2018 she was awarded the John Fritz Medal from the American Association of Engineering Societies, one of the highest awards given to an engineer in the United States. In 2020, she was elected as Distinguished Member of the Earthquake Engineering Research Institute and was honored with the C.L. Peck, Class of 1906 Chaired Professorship in the School of Engineering at Stanford.  In 2021 she was elected to the National Academy of Engineering.

During her career, Dr. Kiremidjian has held numerous service positions that have enabled her to greatly influence the field of earthquake risk reduction. As co-Director and Director of the John A. Blume Earthquake Engineering Center at Stanford University, she organized workshops on earthquake lifeline and regional risk assessment, testified to the California Congress in support of the formation of the Pacific Earthquake Engineering Research Center (PEER) in 1995, testified to US Congress on behalf of EERI in support of the re-appropriation of the National Earthquake Hazard Reduction Act (1997), and testified to the US Senate Committee on Commerce, Science and Transportation on behalf of the American Society of Civil Engineers (2009). Dr. Kiremidjian has published more than 350 journals papers, book chapters, technical reports, and refereed conference proceeding papers, and holds patents on wireless structural health monitoring.

The 1971 San Fernando earthquake was a pivotal point in our awareness of the vulnerability of our lifelines to earthquakes. Since then, significant progress has been made in addressing the many issues around building more resilient lifeline systems. With our infrastructure deteriorating, our focus is now on a vision that addresses not only vulnerability of lifelines to extreme events, but also redesigning and rebuilding these systems that can meet the challenges of the future.

The objective of this panel session is to bring experts who can share their vision on the future developments of the various infrastructure systems. As technology has accelerated the development of various components within each lifeline sector, we are faced with the question – what will the lifelines of the future look like? For example, how will we have to design our transportation systems to address the increased adoption of elective vehicles (EVs), autonomous vehicles (AVs), flying taxies or other short distance transport? Another example is the major expansion of renewable energy sources, such as photovoltaics, wind turbines, coastal water turbines. What will their role be in future disasters and how will our electric grid need to change to address both extreme event and every-day needs? The scarcity of water with recent droughts has brought to light the need for greater water conservation and for further exploring alternate water sources. There are significant ongoing investigations on issues related to water management, development of advanced cost-effective desalination technologies, and water reuse in urban areas. Treatment of wastewater is receiving similar attention. A related key issue is the interdependencies of the various lifelines and how can these be addressed.