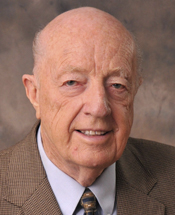 B. John Garrick is an international authority on the development and application of the risk sciences to quantify the risk of catastrophic events of natural and engineered systems for the protection of society and the environment. His accomplishments were founded on his Ph.D. thesis in 1968 on unified systems safety analysis that contributed to a general theory of probabilistic risk assessment, generally referred to as quantitative risk assessment (QRA).

He created the first consulting firm of scientists and engineers totally dedicated to the development and application of QRA to both engineered and natural threats.

He has been a member or chair of 25 different National Research Council committees, including the National Academies’ Board on Radioactive Waste Management, and the Commission on Geosciences, Environment, and Resources. He was vice chair and had the technical lead of the National Academy of Science’s Committee on Lessons Learned from the Fukushima Nuclear Accident for Improving Safety and Security of U.S. Nuclear Plants and chairman of its subpanel on probabilistic risk assessment.

Garrick is a Distinguished Adjunct Professor at UCLA Engineering. He is the founder and major donor for UCLA’s Institute for the Risk Sciences, which is named in his honor.

Garrick received his Ph.D. and M.S. from UCLA and his B.S. from Brigham Young University. He also attended the Oak Ridge School of Reactor Technology. He is a registered professional engineer in California.